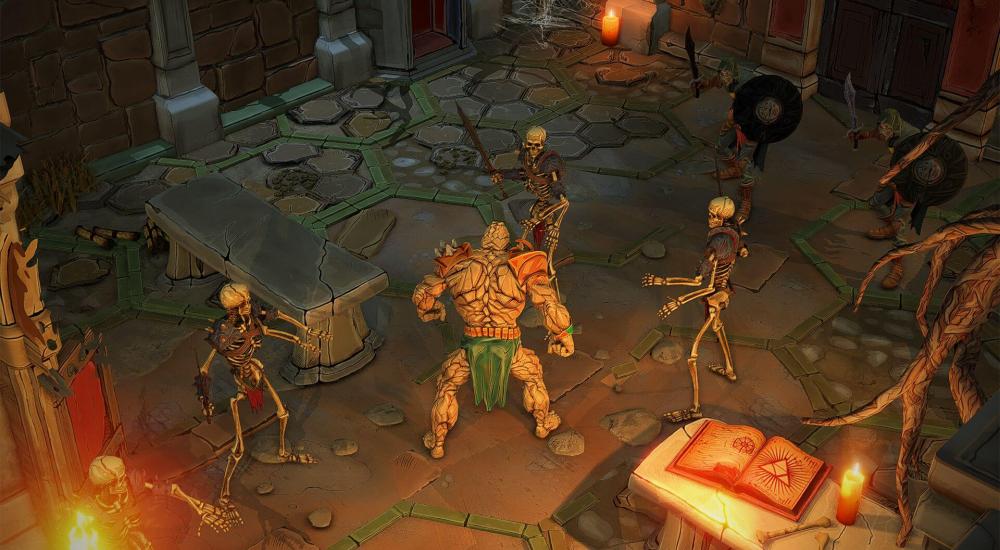 The other night an extra heavy weight Co-Opticrew dove into the early access version of Gloomhaven, a tactical RPG based on the board game of the same name. In it we check out some four player co-op in the game's Guildmaster mode all while learning the ropes from Locke, who clearly has lived a few lives in these dungeons.

From the little we've played of Gloomhaven I can safely say it's one of the most strategic turn based RPGs I've ever played. There are several points of evaluation and decision making that go into every turn. You'll need to consider turn order, balance against card draws for abilities, chance that against modifier cards for every action, and of course all of that up against whatever the enemies that vastly out number you do with every turn.

Perhaps the most unique feature of Gloomhaven is just how carefully you need to manage your deck of ability cards against the rounds of play. If you burn through your cards too fast and you'll have nothing left to finish the round. Your strategy of choosing cards and sub abilities on each card for the round quickly can be thrown out the window due to a random enemy action or even something your teammate does.

In terms of co-op players can choose from a variety of classes of characters, each with their own unique cards and abilities. A lot of the classic tropes are here in the tank, dps, and support type roles - though things are a bit more blended.

Overall I liked what I played, the 90 minutes flew by and we had plenty of laughs along the way. There's definitely some early access quirks to the game still, but overall this could be a staple in your family or friend game nights.

I was curious to see how the official digital version of Gloomhaven was panning out, and overall I was quite impressed. I have been through two Gloomhaven campaigns; one tabletop version, and an unofficial tabletop sim mod and the digital version makes me want to do another. Even in early access, the game demonstrated what I needed to know for it to be a comparable experience to the tabletop version.
One of the standout things I enjoyed from our foray Nick described above was the art design and animation. The game looks and feels great. The models look great, for both the player characters and the enemies. The environments make me feel like I'm playing in front of 3D model terrain sitting my table. The character animation when playing a card is the extra step a digitized board game needs to bring everything to life, and I'm here for it.

The other highlight was the user interface. There is a ton of information in Gloomhaven that you need to comprehend, and the UI in the digital version lays it out very nicely. It will take several sessions to figure out what everything does, but once you know what is going on all the information is presented in a clean and non-obtrusive manner. This will lend itself to better strategy between teammates, as well as sessions not getting bogged down by trying to figure out what happens next.

Gloomhaven is a beast of a game, and shelling out at least $100 for the tabletop version isn't a viable option for everyone. The digital release is an easier price tag to swallow, and a really great way to get into an esoteric game. It still stands as the best tabletop experience I have had with my board game group, and I would hope that the digital version of Gloomhaven will bring more people into the hobby so it can continue to flourish.