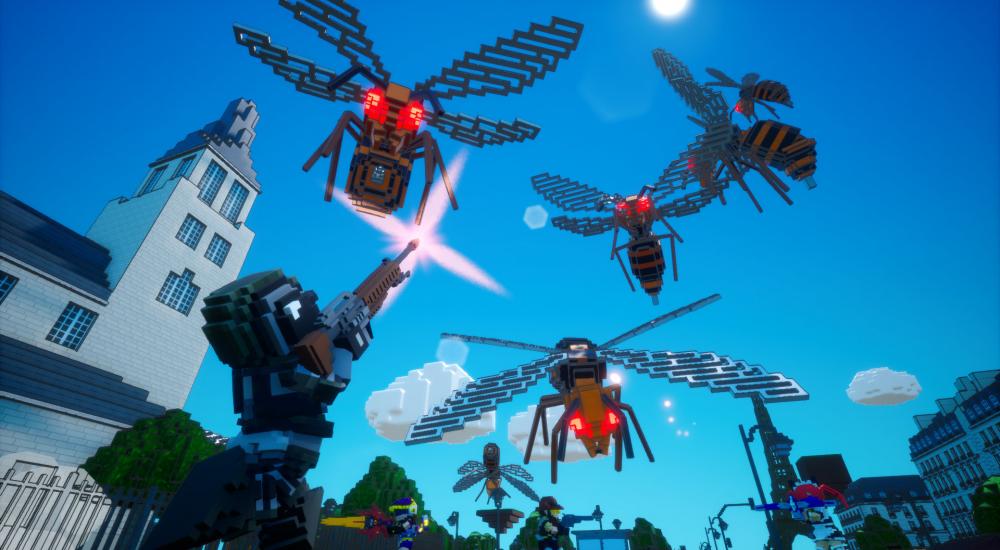 The new Earth Defense Force: World Brothers game may look like a "Minecraft" but it's anything but. The game still maintains the over the top campy action of the series, but layers on thick layers of "videogame." It feels almost like playing a classic game with the fanfare music and sound effects combined with the 8-bit style graphics. Okajima-san said that the team spent weeks in pre-development getting the size of the voxels and the position of the cameras just right to showcase the destruction and scale with the new art style, and it definitely pays off.

Earth Defense Force: World Brothers starts with the Earth destroyed into pieces. Each of these pieces are a level in the game and sport a familiar theme relevant to that pieces' original location - like the Statue of Liberty in NYC or famous downtown buildings in Tokyo. It's here the game's 60 plus missions will take place across 5 difficulties. The main goal of each mission is not only to clear out the oversized bugs and baddies, but to rescue a new member of the EDF team so that you can control them in a future mission.

While previous EDF games focused on weapons and items to collect, EDF: WB is actually focused on character collecting first and foremost. All playable characters from the previous EDF games are present to unlock on top of a wide range of standard and over the top ones. For instance...a vampire. For the most part the character play the same with a few exception, but they all come with unique items that can then be interchanged.

In terms of the game's co-op play, four player co-op is present in online for all three systems. PlayStation 4 offers a 2 player split-screen mode. It should be noted that while playing single player you'll be controlling four characters at the same time and when you hop online that number jumps to 16 characters between all four players. While I didn't get to see that during our preview I've got to imagine it's going to get pretty chaotic.

All in all I really liked what I saw from the game and was pleasantly surprised on how much it owned its new look but also maintained a lot of the camp that made the earlier games so much fun. I'm anxious to give the game's online co-op mode a try and thankfully we won't have long to wait. Earth Defense Force: World Brothers launches on Nintendo Switch, PlayStation 4 and PC on May 27th.