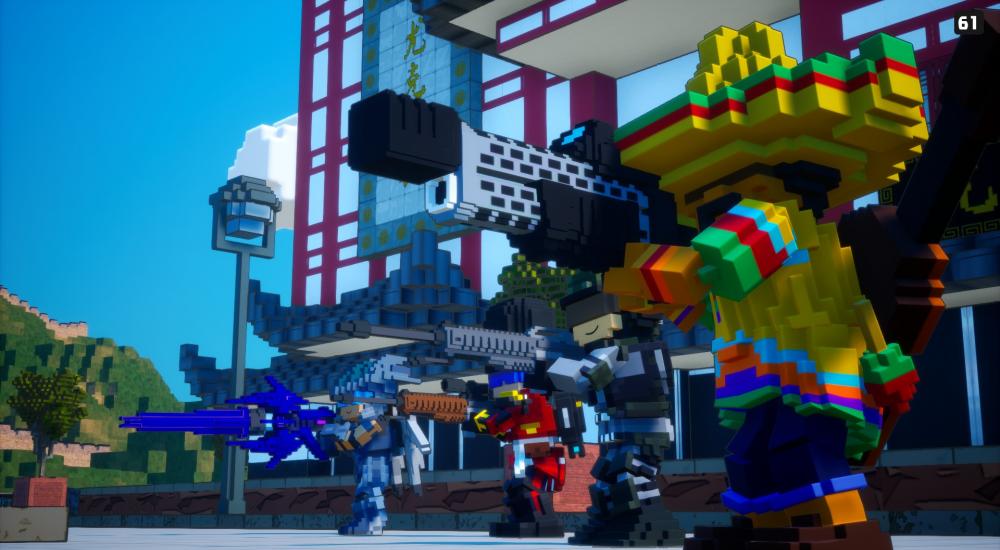 It has been a long time since an EDF game launched on multiple consoles simultaneously, but that changes today. Earth Defense Force: World Brothers has just arrived on Switch, PlayStation, and Steam, bringing a fresh art style, dozens of humorous unlockable characters, and four-player online co-op with it. Are you ready to save the Voxel Earth from devastation, soldier?

EDF: World Brothers takes place in a parallel universe in which everything is made up of Minecraft-like blocks called voxels. One day, the various enemy factions from previous EDF games team up and attack Voxel Earth, splitting it up into pieces. Only the EDF can thwart the alien invaders, but they’ll need help to do it. Thankfully, World Brothers features over 100 playable characters to unlock, including EDF classes from previous games and many more. It’s the EDF dream crossover game that fans never knew they needed!

As mentioned in our eyes-on preview, the other big change in World Brothers is that each player gets to control a team of four characters during a mission, switching between them at will. With four slots and dozens of characters, it’s easy to make a team that covers all the bases – tank, flight, melee, sniping, etc. all on your own. During multiplayer games, individual players still get to bring their 4-member teams, adding to the chaos that EDF games are known for. Perhaps because of the difference in power and features between the three supported platforms, co-op options differ between each version of World Brothers. All three support 4-player online co-op, though cross-platform play is not supported. The PlayStation version is the only one with 2-player split-screen co-op, whereas the Switch version supports LAN play (each player needs a Switch and a copy of the game).

Earth Defense Force: World Brothers sells for $59.99/€59.99/£53.99 on Nintendo Switch, PlayStation 4, and Steam. The PlayStation and Switch games are also available in Digital Deluxe versions for $79.99, bundling the game with its Season Pass. The Season Pass includes 11 new missions, a new Armageddon difficulty level, unique characters and cosmetics, playable frogs and Cosmonauts from EDF 5, and playable Aya and Saki from Onechanbara.

We’ll have a full review soon, but it’s safe to say that Earth Defense Force: World Brothers is a colorful and creative take on the series that fans will love – if they don’t get hung up on the new art style. PlayStation Plus members and Steam users can get the game for 20% off during launch week, so suit up quickly, soldier!