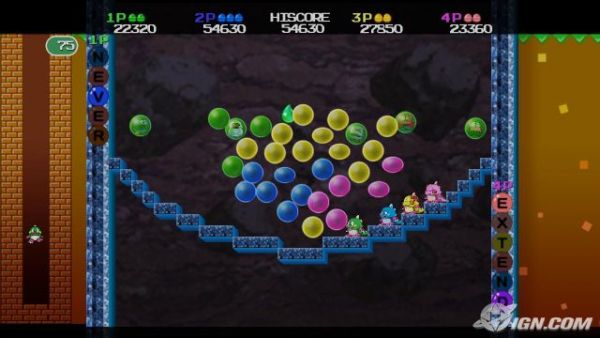 Several weeks ago, Bubble Bobble was the topic of our Co-Op Classics column.  We waxed nostalgic at the cute widdle dinosaurs and co-op action.  A remake of Bubble Bobble, called Bubble Bobble Plus!, is available Nintendo's WiiWare service in Japan and Europe.  No North American release has been announced yet, but it seems the bubbles will soon be bobbled on Xbox Live Arcade, as well!

The German version of the ESRB has rated a game called Bubble Bobble Neo.  Unless this is a Bubble Bobble/Matrix crossover (which would be pretty cool, now that I think about it), it's a safe bet that Xbox 360 owners will be able to capture wacky enemies in colorful spit spheres sometime in the near future.  As you can see in the image above, Neo will support 4 player co-op  I call dibs on the pink one!  There are a few more screens at the link below.