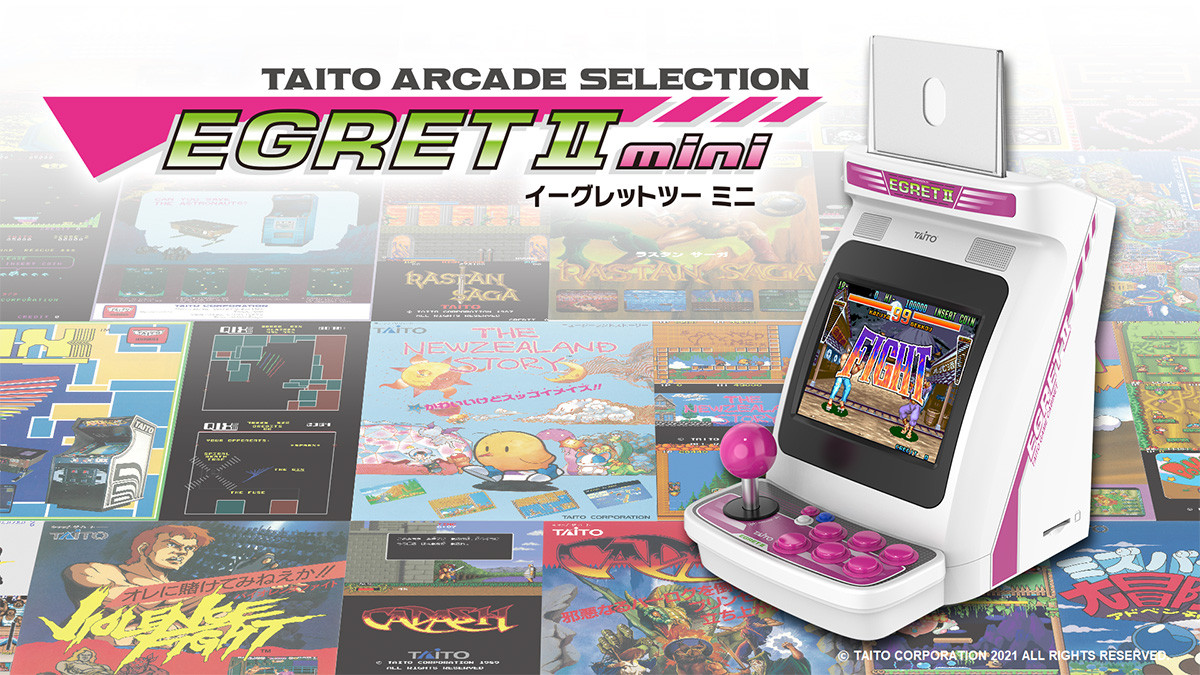 The original Egret II is a sitdown arcade cabinet manufactured by Taito in 1996. Unlike American arcade cabinets, most Japanese arcade cabinets are designed to be played while seated and do not feature custom cabinet artwork and designs. The Egret II is an iconic cabinet used by many Taito arcade games and features a rotatable screen to allow for both horizontal and vertical-ratio games. Even though both the Egret II Mini and Astro City Mini are designed by Zuiki, this one sports several unique features. For example, the monitor can be rotated to a vertical “Tate” orientation, allowing for perfect visual recreation of vertically oriented games like Space Invaders and RayForce. Additionally, several add-on controllers will be sold for the Egret II Mini. These include a 6-button controller, an arcade stick, and, most uniquely, a Paddle & Trackball Controller. This special controller also includes an SD card with 10 additional games, pushing the total number of playable games up to 50. Playing games like Qix and Arkanoid at home with proper arcade-style controls is quite a selling point to fans of classic Taito games. Clever and authentic hardware is only one part of making a compelling mini arcade cabinet, though – fun and iconic games are also needed. Taito has been announcing the games list of the Egret II Mini in stages. As of this writing, 33 of the 40 built-in Egret II Mini games have been announced, with 7 more games to be revealed in a future announcement. 8 of the 10 games included with the Paddle & Trackball Expansion set have been announced. Bolded titles feature 2-player co-op.

That’s 10 out of 40 games on the Egret II Mini itself with co-op and 2 out of 10 games on the expansion set with co-op, making for 12 co-op games in total. From a co-op standpoint, the overall games list is fairly impressive, with all three co-op Bubble Bobble games, Elevator Action Returns, Cadash, RayForce, and Arkanoid Returns numbering among the best-known titles. As for the unannounced games, I’m hoping for Jungle Hunt (1982) and especially the co-op titles Rastan Saga II (1988), Majestic 12: The Space Invaders Part IV (1990), Warrior Blade: Rastan Saga III (1991), and Darius Gaiden (1994).

The Taito Egret II Mini is scheduled for release on March 2, 2022 in Japan only. That said, the Astro City Mini launched as a Japan-only release only to later receive limited US and European releases, so anything is possible. Even if this one never receives a release outside of Japan, it can be preordered from several online retailers. It won’t be cheap, though. Amazon.jp’s price for the Egret II Mini by itself is 21,379 Yen (~$194) shipped and 69,561 Yen (~$629) shipped for the complete package with all controllers.

Check the Japanese Egret II Mini website for more details, and stay tuned here at Co-Optimus for the final Egret II games list announcement! Our thanks to Jake Kevin McNeil of the Consoles & Handhelds Facebook Group for his help with researching this story.