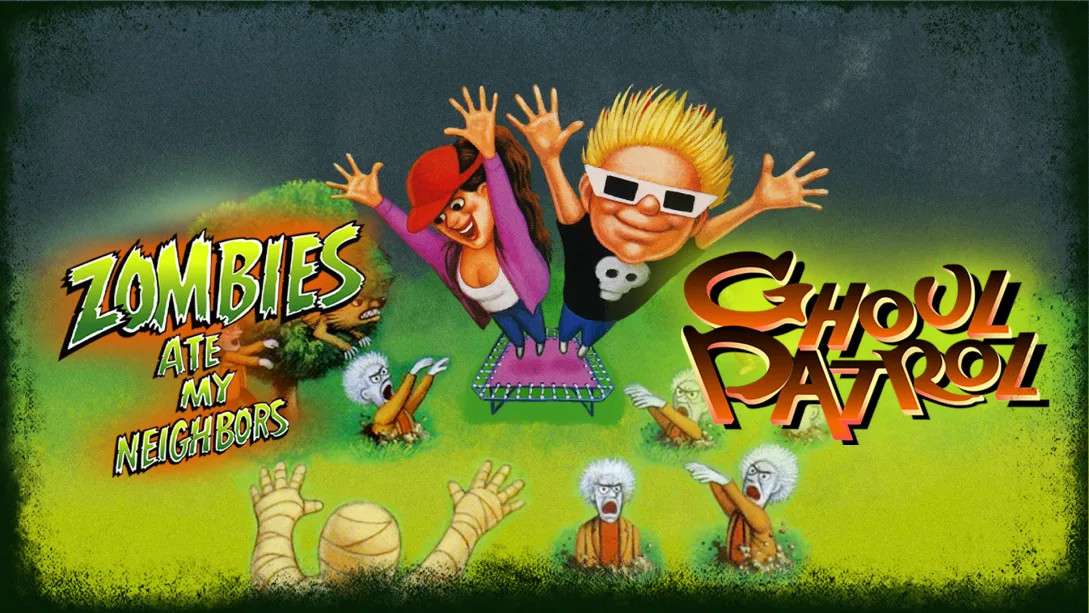 Back in the innocent days of 1993, LucasArts created a unique 16-bit co-op game called Zombies Ate My Neighbors. The game starred two goofy teenagers who must wield squirt guns and other improvised weapons to save their neighborhood from an invasion of monsters and aliens. It also spawned a less beloved sequel, Ghoul Patrol. Now both of those games are officially available on Xbox, Switch, and PC in a collection titled simply Zombies Ate My Neighbors and Ghouls Patrol. Zombies Ate My Neighbors is a 2-player cooperative run-and-gun shooter starring ultra-white teens Zeke and Julie, who seem to be movie nerds. They must navigate 55 levels featuring creepy/silly foes like Zombies, Chainsaw Maniacs, Mummies, Evil Dolls, Lizard Men, Blobs, Vampires, Martians, and more. One or more neighbors must be found and rescued on each level. This game qualifies as a true co-op classic thanks to its wacky enemies and weaponry, distinctive art and music, and enjoyable co-op.

Ghoul Patrol, released in 1994, sees Zeka and Julie rather dopily releasing an army of ghosts and demons from a haunted book. I mean, they were totally asking for it. Anyway, this title started its life as an unrelated game, outsourced to Malaysian studio Motion Pixel, before becoming a Zombies Ate My Neighbors sequel. The wackiness and creativity of the first game is mostly absent, and there are only 17 levels this time, but it's still a decently fun co-op shooter when judged by its own merits. Official features of Zombies Ate My Neighbors and Ghouls Patrol:

The save feature is definitely a welcome addition; the original games used passwords instead. Widescreen enhancements would have been much appreciated, but I suppose you can't expect the moon from a collection that only costs $14.99. The important thing is that Lucasfilm Games (and DotEmu on PC) are making it easy to buy and play these classic 16-bit titles on modern hardware. The more co-op classics we can legally play, the better!

Zombies Ate My Neighbors and Ghouls Patrol is available on Xbox, Switch, Steam, and GOG. The PlayStation version doesn't quite seem to be out yet, oddly. Limited Run Games is also offering a few physical versions of this collection, though they will eventually sell out.