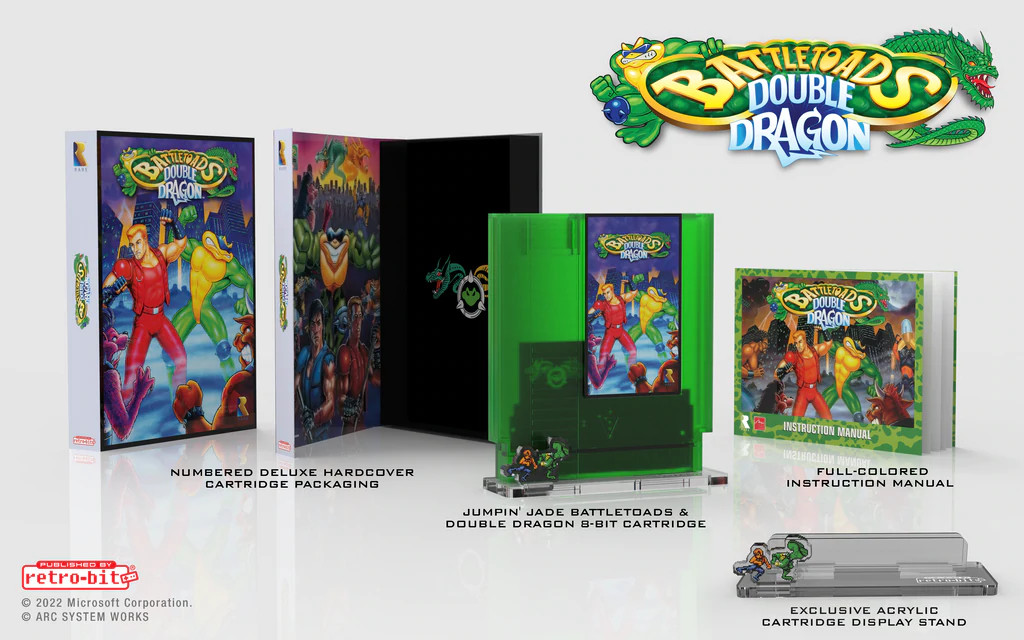 It’s hard to imagine nowadays, but long ago, two of the 8-bit era’s most popular beat ‘em up franchises once teamed up in a single game called Battletoads/Double Dragon. Developed by the wizards at Rare, the crossover game deftly mixed the two properties to produce a game that remains well-liked by those who played it. Sadly, Battletoads/Double Dragon isn’t getting a re-release for modern consoles, but the NES version is getting a fresh production run from Retro-Bit that can now be preordered from several retailers. In Battletoads/Double Dragon, the Dark Queen has teamed up with the Double Dragon series’ Shadow Warriors in order to conquer the galaxy. The Battletoads recruit Billy and Jimmy Lee to help them board the villains’ ship and save the day. Players can choose between all three Battletoads and both Lee brothers and then go on a single-player or co-op adventure through 7 levels set on the enemy’s spacecraft. Being developed by Rare, it plays more like Battletoads than Double Dragon but still mixes enemies and elements from both series.

Although Battletoads/Double Dragon was originally released on Super NES, Sega Genesis, NES, and GameBoy, Retro-Bit is only producing a new run of the NES version (which also happens to more expensive on the used game market). The game is fully licensed by Rare and Arc System Works. Preorder it for $59.99 at Limited Run Games and Strictly Limited Games. Preorders will close on May 22. This re-release is cool, but did we mention that the game also needs to come to Xbox, PlayStation, and Switch?