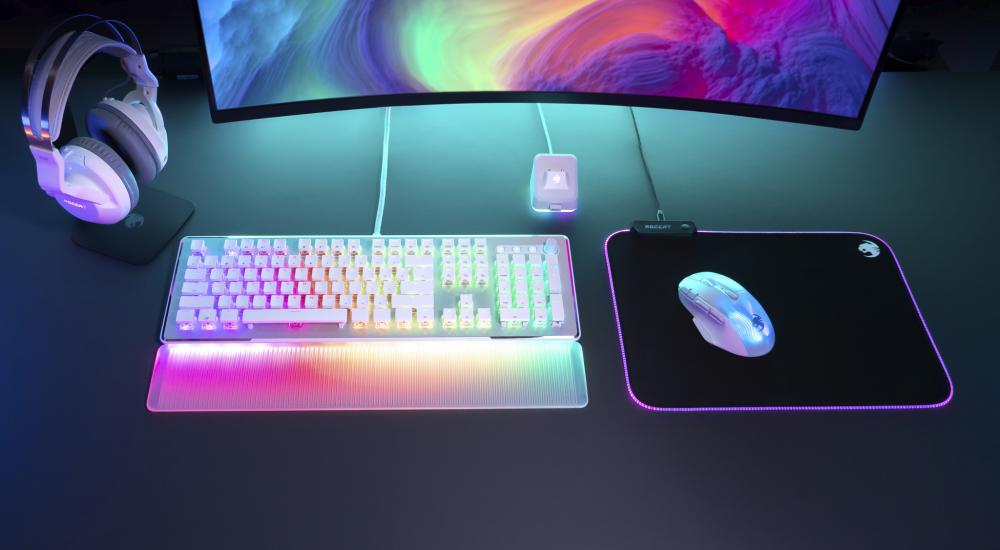 ROCCAT is back with a new keyboard in their Vulcan line, the Vulcan II Max - a full sized keyboard with plenty of bells and whistles set to compete with the likes of the Razer Huntsman and Corsair K100.

Powering this keyboard are the TITAN II optical switches which promise 100 million keypress lifecycle, a 1.4mm actuation point, and just 3.6mm of travel distance. Comparing this to the Vulcan TKL Pro which had the first generation of these switches, I'd say the TITAN II feels a little less clicky, but more smooth. It feels like it takes just a bit more pressure to type on the Vulcan II Max overall. Perhaps the most impressive feature of the keyboard is its LED lighting, providing incredibly bright and vibrant lighting on all keys AND the palm rest. Even more impressive is now the LEDs are actually functional, providing you feedback on information like your wireless mouse's battery level, an incoming phone call or IM, or even mappable to PC performance stats. These combine with near limitless assignment of function keys overall - just about every key on the keyboard can have an alternate function assigned from hundreds of options.

Speaking of performance I've been using the keyboard with Phasmophobia, Overwatch 2, and Second Extinction. All in all it feels incredibly close to the Vulcan TKL Pro, though the bigger size does mean some extra space for my hands I had to get used to. But in terms of speed, accuracy, and performance - I'd say everything is what you'd expect from a $230 keyboard.

While I haven't used these competitors keyboards personally, I thought it'd be good to show how it stacks up against who ROCCAT considers the competition.

The bottom line on the Vulcan II Max is this. It's an incredibly solid keyboard with great performance and features and a ridiculous amount of LED lighting. The SWARM software is easy to use and fairly light weight - with 4 ROCCAT devices it's using 46MB of memory. As with any of these devices if you are already in the company's ecosystem and in the market for the latest and greatest - you can't go wrong with this keyboard.