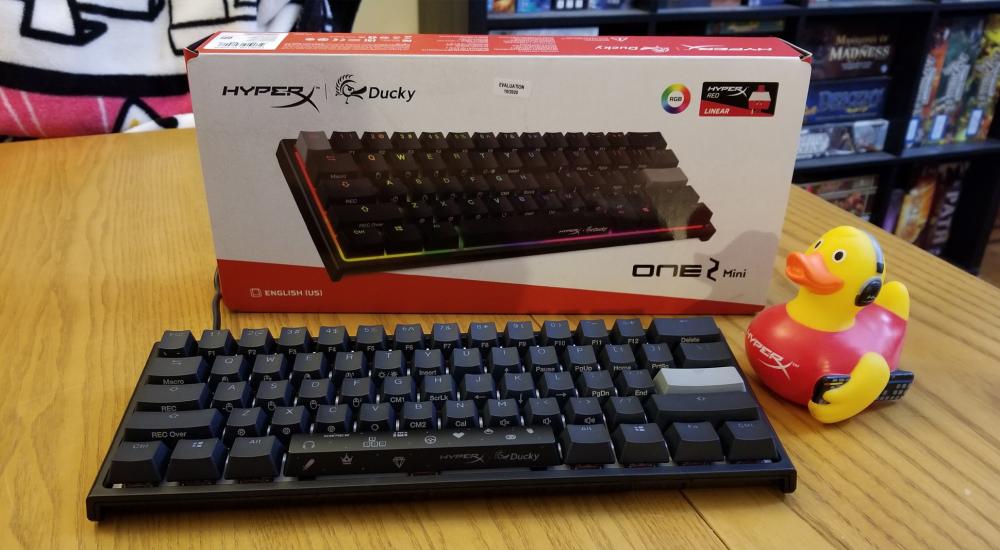 Earlier this year in May, HyperX and Ducky launched a collaboration: the HyperX x Ducky One 2 Mini Mechanical Gaming Keyboard. This was an exciting collaboration that partnered Ducky signatures (like 60% keyboard size and Ducky Macro 2.0) with HyperX hallmarks (such as in-house HyperX switches with exposed LEDs). Only 3700 units were released, and they sold out very quickly.

This week, Ducky and HyperX announced another launch of the HyperX x Ducky One 2 Mini (henceforth “HxD One 2 Mini”), this time with a different colorway: an all-black colorway (contrasting with first run’s black and red colorway). The number of units will still be limited, but this time will be close to double with 6500 units manufactured. I was lucky enough to have an opportunity to take a review unit for a spin prior to the opening of public sales. Let’s dive in. On the physical side of things, the HxD One 2 Mini is deceptively unassuming. A “60% keyboard” (meaning it has 60% of the keys of its full-sized relatives), it’s extremely compact without separate function keys, arrow keys, numpad, and navigation keys. Instead, most of these “missing” keys are automatically mapped to other keys (printed helpfully on the user-facing side of the keys) by preceding that key with the Fn key (e.g. Fn 1 is the F1 key). It’s also quite light for a gaming keyboard, coming in at 599 g. For comparison, the HyperX Alloy Origins comes in at close to double the weight at 1075 g.

In addition to the keyboard itself, the box includes a plastic-coated USB power cable, a thick full-colored manual (more on this later), a Ducky-branded keycap puller, and 11 additional keys for users to mix and match their preferences. Most are gray key variants, but there are a couple logo-based keys (including the Ducky Year of the Rat key), as well as a decorative spacebar with small gamer-themed icons. I appreciate that there’s a fair amount of physical customization available out of the box (and you bet I slapped on that icon-emblazoned spacebar right away), but I like the default black keys with the alternate functions printed on the side so much that I don’t think the gray keys will get much play. At least not until I’ve been using the keyboard for a very long time and the secondary key functions are second nature.