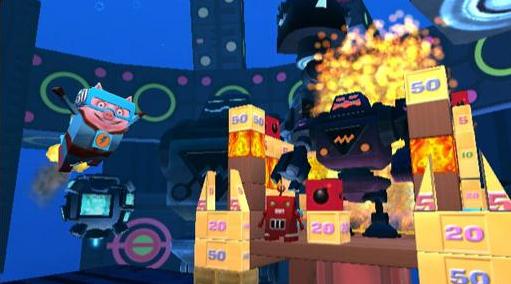 Last year, Boom Blox hit the Wii, and, according to Co-Optimus' own artist-bot, Mike, it's one of the best experiences for waggly console.  Props to Steven Spielberg for the big improvement over his previous game featuring blocky characters, E.T.

In just a couple weeks, the sequel, Boom Blox Bash Party, will be released.  As you'd expect from the title, Bash Party has a larger emphasis on the multiplayer aspects, including co-op!  EA has just launched the official site for the game, and all sorts of screenshots and gameplay footage are available there.  There's even a video specifically for co-op, instructing players to "Team up and destroy!  Work together to complete levels and achieve gold!"

The game is up for preorder at Amazon, for a 10% discount off the already reasonable $40.  That's just a few bucks more than the original, which hasn't come down in price much, at all.  Perhaps I'll break my string of music games for this one...