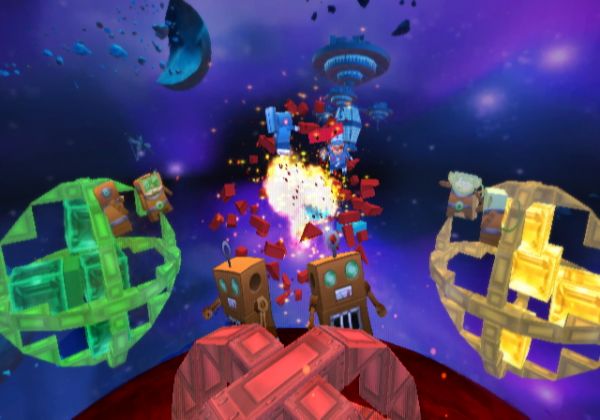 Boom Blox Bash Blowout.  Boom Blox Bash Brouhaha.  Either of these titles would have kept the initial consonant sounds repeating.  But no, EA and Steven Spielberg had to go and break the pattern with "party", a super imaginative word that is totally underused in other Wii titles.  /facepalm

All kidding aside, Boom Blox Bash Party does look like a good time.  As mentioned on the last podcast, the original Boom Blox was a fine game.  Like any good sequel, Bash Party takes all the cool bits from its predecessor and cranks them up a notch or two.  The overall emphasis has shifted more towards multiplayer, with double the multiplayer modes this time around.  That's fine for us, since co-op is included!

We have a gallery and a press release for you after the break.

Sequel to Award-Winning BOOM BLOX™ Takes You From Depths of Sea to Outer Space for a Party Anyone Can Throw!

Get ready for even more blox-busting action with BOOM BLOX™ Bash Party for Wii™, the sequel to the critically-acclaimed BOOM BLOX™ game for Wii. Developed by EA in collaboration with director and producer Steven Spielberg, BOOM BLOX Bash Party takes destruction to new heights, providing the ultimate social gaming experience! BOOM BLOX Bash Party will get your party started with new Versus, Co-Op and Team Play challenges - twice as many multiplayer challenges as the original BOOM BLOX.

From the depths of the sea to the far reaches of outer space, BOOM BLOX Bash Party features more than 400 completely new levels! Explore exciting new themed worlds with unique physics and dramatic visuals. Create chaos, watching puzzles and explosions unfold, while drifting under water, or floating in zero gravity!

For even more strategic destruction, BOOM BLOX Bash Party also features all-new Blox, tools and characters! Experiment with the explosive and infectious Virus Blox, or the ever-moving Conveyor Blox. Experiment with new shapes like Cylinders and Wedges, or use the new Cannon and Slingshot toys to sling and launch blox! Even the new cast of characters is in on the action! Grab hold of the characters and send them flying! They are just like Blox now, so you can topple, bash and sling them like never before.

And the fun continues online! Enhanced capabilities let you download new levels with the press of a button. Simply connect your Wii to the Internet to grab, play and rate new levels from EA and members of the BOOM BLOX Bash Party community. Build your own levels using the game’s easy-to-use Create Mode – the same tool which the BOOM BLOX team used to create the game itself!