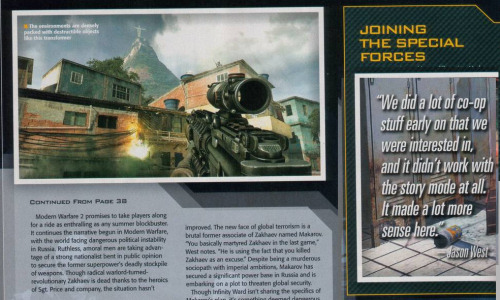 Yesterday, Infinity Ward Community Manager Robert Bowling posted on Twitter that a 10-page exclusive reveal of Modern Warfare 2 would be featured in the next issue of Game Informer.

It was inevitable that scans of the article would hit the internet, but I think this is some sort of record: this morning an article popped up on hub site Colony of Gamers providing some information gleaned from the magazine write-up. While a few of the details are exciting, it is not all good news.

You see, Infinity Ward has decided to forgo the co-op campaign in exchange for a series of side missions called the Special Forces mode. While the prospect of these co-op missions is interesting, they should not be completely en lieu of co-op in the single-player campaign.

What's ironic is that the developers fully acknowledge that co-op is wanted. I just can't wrap my head around a top-notch development studio asking its fanbase for input and then blatantly appeasing them with lackluster results, i.e. gimped co-op.

Despite my obvious aggravation, I'm dumping ketchup all over these words...because I'm holding out that Infinity Ward will make me eat them. Lover of all things co-op that I am, I'm still supremely stoked for Modern Warfare 2's campaign and multiplayer...and yes, I will spend more than my fair share of time in the Special Forces mode. If they decide to go the way of Treyarch and surprise us with a goofy tack-on like Nazi Zombies...well, that just may placate me further.

But it's like getting a1970 Dodge Charger without the Hemi, ya know?

Here's the full list of details, as provided by Colony of Gamers:

Single player enemies will have "customized" weapons similar to the multiplayer component of COD4.

The ice mission shown to GI demonstrated the game's open-ended approach to combat, showing how stealth can be implemented if the player chooses.

While the gameplay is open-ended, the story is "on-rails".

Infinity Ward realizes that the "invisible line" where enemies will stop coming in COD4 wasn't great, so they're trying hard to eliminate that. Also, they are lengthening the single player past the 6-10 hour mark of COD4.

"Special Forces Mode" is a major part of MW2, a series of missions in the spirit of the Mile High Club from COD4. It will also have co-op in this mode. Gears-style bleed-out-and-partner-revive will be used.

Riot shields will be implemented in the game.

Snowmobiles are used as a form of escape in the demonstration. Unclear whether or not the player will drive, shoot, or both.

Players will alternate using the two triggers to climb ice-walls.

Movable turrets will be used in SF mode and Single Player, no official word on online use.

IW wants to implement an accomplishment system to online, as they want to make their players famous.

Online mode will use a "Live-Patching" system, where IW can manipulate spawn logic or certain parts of a multiplayer map without doing a full-blown patch.

Another demoed area shows an enormous desert setting where Task Force 141 drops into a wasteland and must navigate a "lengthy trek" to a fully-rendered valley with scattered caves, reminiscent of Iron Man.

IW is focusing on details for the COD4 sequel, citing iced-up tire treads in the Russian level.