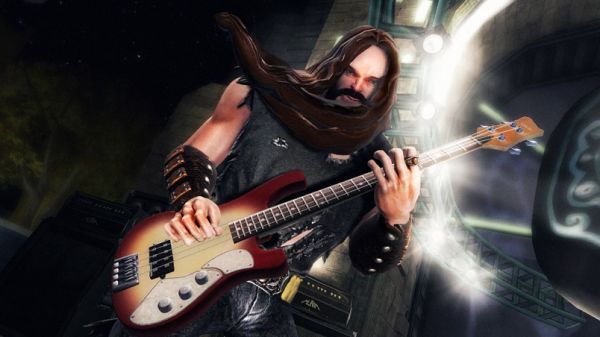 Hot on the heels of, well, pretty much every other Guitar Hero release, comes news of Guitar Hero 5.  The game was announced, to no one's surprise, just over a week ago and now we have the first details, including a couple screenshots showing off the new art style, and even some of the artists featured on the soundtrack.

The biggest addition is allowing players to mix and match instruments as they like.  No longer will you be restricted to two guitars, drums, and a microphone.  Go all rhythm with 3 drummers and a bassist, test your harmonies with four singers, whatever you like!  Party Play mode will include easy drop in drop out, and changing difficulty levels on the fly, even mid-song.  That sounds quite co-op friendly!

Other tweaks include having the entire songlist being available from the start, no unlocking required.  Interestingly, GH5 promises compatibility with all your Guitar Hero World Tour DLC.  Now if only you could export all of the songs on the World Tour disc, too.  Seems like we were just talking about that...

The Rolling Stones, Santana, Johnny Cash, and Bob Dylan highlight the artists on the soundtrack so far.  Also, twenty five bands will make their music game debuts in GH5.  Looks like this is a step in the right direction for the franchise, but I still worry about oversaturation.  And please, for the love of Billy, allow band members to save each other from failing!

The White Stripes, Kings of Leon, The Rolling Stones, Santana and Johnny Cash Among the Artists Featured in Guitar Hero 5

Innovative Social and Competitive Gameplay Features Designed for All Levels of Expertise, Puts More Fun and Control in the Hands of Music Lovers

Santa Monica, CA – May 18, 2009 – Guitar Hero continues to re-define the music and gaming experience this Fall with the release of Guitar Hero 5. Featuring the best variety and biggest rock stars of today combined with classic rock anthems, Guitar Hero 5 is the latest installment of the world’s most popular music game. For the first time ever, players can customize the make-up of their band by rocking with any combination of instruments in-game: whether it be two guitars and two drums, or three guitars and a microphone, any combination is possible, allowing players to experience music their own way. Brand new, innovative, easy-to-use gameplay modes like Party Play and RockFest put fun, competition and control at center stage as fans tailor the Guitar Hero experience to match their personal style and interests. For extended hours of entertainment, downloadable content from Guitar Hero® World Tour will be compatible with the game and will automatically be updated to include all of the upgrades and enhancements of Guitar Hero 5.*

Guitar Hero 5 features the strongest, most varied set list to-date comprised of master tracks from 85 of the hottest bands of today and the biggest classic acts including; Kings of Leon, The Rolling Stones, The White Stripes, Santana, Vampire Weekend, Tom Petty, Johnny Cash, Bob Dylan, plus more than 25 artists from a variety of music genres that will be making their music video game debut.

“Guitar Hero is the music platform for today because it celebrates the social nature of music and brings fans closer to the music and artists they love while allowing them to share and discover music with their friends, family and online communities,” said Dan Rosensweig, president and chief executive officer of Guitar Hero.

Among the first-time-ever features of Guitar Hero 5 are: Party Play, where players can jump in or drop out of gameplay seamlessly; RockFest, a comprehensive competitive experience available featuring five new head-to-head modes playable online or in your living room; and the ability to play the entire set-list from the first time the game is turned on.

Guitar Hero 5 refines the player experience, enhances the art style and redesigns core features such as GHMusic StudioSM, making it the most accessible, fun-to-play and authentic experience for seasoned music gamers as well as first-time players. New innovations such as Band Moments, where bands are rewarded for hitting special note streams together and song challenges where gamers are tasked to play through a song a specific way, add a new competitive layer of excitement and accomplishment to the music rhythm genre.