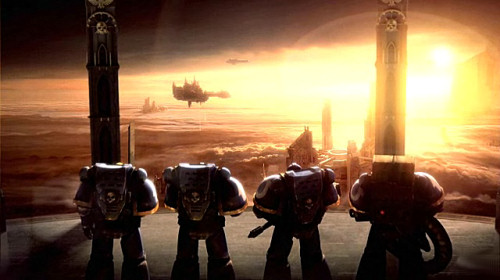 Relic games seems to be enjoying themselves happily nested in the realm of Games Workshops Warhammer, and we're happy to see another beautiful game shaping up after being wowed by Dawn of War 2. Warhammer 40k: Space Marines is their newest project, and by the looks of things, we won't be disappointed. The teaser trailer we have to share showed scenes of fast paced mayhem featuring a "squad" of Space Marines. IGN speculates on what this could mean for the wonderful world of co-op.

"One of the more interesting aspects of the game is the potential for multiplayer. We saw four Space Marines standing around, so the natural question to ask is if the game will support some kind of co-operative play online or locally. Unfortunately this isn't yet something Relic is yet talking about, though it was mentioned that multiplayer was going to be a major focus of the game."


It would appear that you'll be playing as a genetically enhanced battle-ready Space Marine, or hopefully a co-op squad of Space Marines, facing off against brutish Orks in epic battle(s) to save the human civilization. We noticed a few other alien species appear briefly in the video, perhaps the Space Marines will see some very interesting battles against aliens, cyborgs, and/or orks oh my. The battle sequences of this video suggest a Too Human style action RPG placed in the realm of Warhammer 40k, which gives us great hope for potential co-op.

The Warhammer 40k universe has very in depth RPG elements, potential armor/weapon customization like changing helmets (or I've painted Space Marines red and gold), unlimited terrain settings, and plentiful alien species that may be used as enemies, making the possibilities with this game nearly endless. We're waiting for Relic to speak up about the details in this, right now all we're seeing is a lot of speculation surrounding this video. Perhaps E3 will shed a bit more light on the subject, and confirm co-op for those of us crossing our fingers!

Now it's time for you to speak up - tell us what you would hope to see from a Warhammer 40k: Space Marines game, or if you notice something tell-tale in the video!

Editors note: This is not the same as the leaked Warhammer: Space Marine from last year... same game title, but the title was transfered to Relic after the Australian studio working on it was shut down.