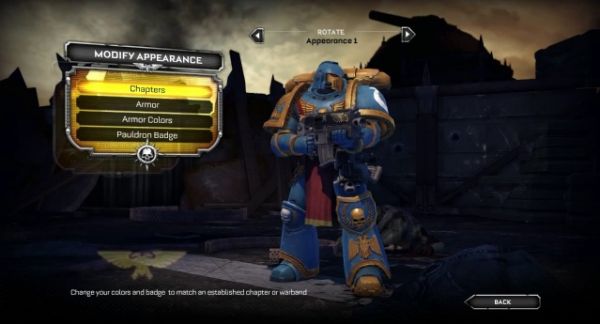 I thought I had cooled on the upcoming WH40k: Space Marine game.  But every time I think I'm over it, I see a new video that sucks me back in.  We've been trying to dig up information on the co-op for months.  It seems like an announcement regarding co-op details has been perpetually delayed.  The game is scheduled to come out in a little over a month, and there's still no official word on co-op.

I was beginning to think that co-op wasn't going to happen at all.  Then we got a nugget of co-op information from the Space Marine forums.  We can speculate (once again, this is only speculation) that there will be some type of Survivor/Horde/Firefight mode, and that's fine with me, so long as it's awesome.  I know most of Co-Optimus's readers are hoping for a co-op campaign, and so am I.  If we are limited to playing a five-man survivor mode, here's hoping we can bring our customized multiplayer Space Marines into the mix.  The following nine minute long video is from the game's multiplayer versus mode and it features more customization options than you can shake a Power Sword at.

WH40k: Space Marine will launch on September 6th for the Xbox 360, PlayStation 3, and PC.  Right now we believe the game will support 5 player online co-op.  THQ promises to "have all the Co-Op details soon," and so do we.