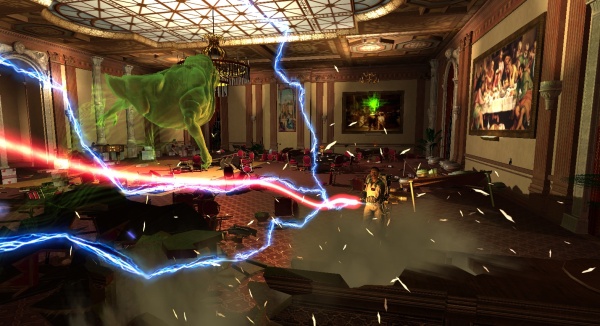 A current-gen Ghostbusters video game has been a long time coming. Rumored for years and announced in 2008, we are finally coming upon its imminent release, and are we ever excited!

It hasn't been so fun for developer Terminal Reality, unfortunately: each time they change publishers, the entire collaborative approval system is basically reset, and each time their work is scrutinized with a fine-toothed comb yet again.

"It is not the ideal situation for a developer like Terminal Reality as we really enjoy a collaborative relationship when we work with publishers, so that has had to be rebooted every time the game changes hands," offered Brendon Goss, executive producer at Terminal Reality...

Brendon goes on to mention that the game is complete on all platforms. This is good news for us, but until Ghostbusters: The Video Game is released, Terminal Reality will be steadily wringing their hands. Consumer reaction and subsequent sales are dependent on many factors, and the team is worried that consumers will be confused by the constantly changing release windows, not least of which is the recent Sony ridiculousness. In other news: all of this rampant press has apparently generated more interest in a Ghostbusters movie threequel, and co-creator Dan Aykroyd has been dishing the dirt on a shooting schedule for later this year. Included among the cast additions are Alyssa Milano -- reprising her role in the Ghostbusters game -- and Eliza Dushku, rumored to be taking up the reins as Ray Stanz's replacement. Sigourney Weaver is also expected to return, but alas: no Rick Moranis so far, as he is deep in retirement. Finally, we're pleased to point out two previews for you...

OXM online currently has a new hands-on preview of the campaign gameplay in Ghostbusters. The newsstand version of OXM also has an exclusive interview with scriptwriter Harold Ramis.

When you're done with that, head over to IGN for a descriptive writeup of all of the gadgets that you'll be using to bust spectral heads.

June 16th is right around the corner. Who you gonna call? Whoever you pre-ordered it from! (We recommend Amazon.com.)