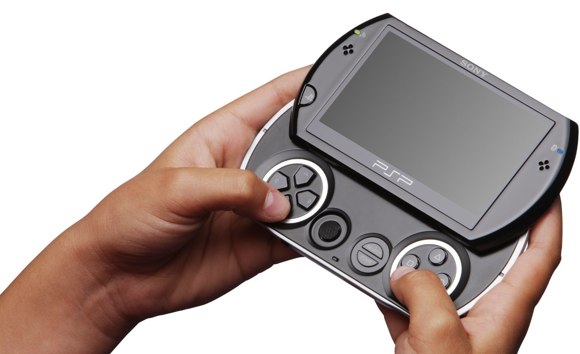 The PSP Go has just become more or less official as Sony's latest episode of Qore, their online video magazine, has leaked early showing off the system.  What we have here is a smaller PSP with the controls hidden under a sliding screen.  The analog stick has been moved to the middle of device in what can only be called a design only mamma could love.

Due this fall, the PSP Go does away with the physical UMD drive and instead relies on downloaded digital content. It packs 16GB of internal flash memory, a 3.8" screen, Bluetooth support, and is 43% lighter than the last version of the PSP, the PSP-3000. Owners will also have the option of expanding the device's storage capacity.

Along with the system, it appears Grand Turismo and a new Metal Gear will be among the first available games for the download only device.  The go is set to launch this fall and will complement the existing PSP lineup, not replace the current UMD models out there.

The prospect of having a download only portable device is an intriguing one, especially for spur of the moment co-op sessions.  There's no word though if existing UMD games will somehow transfer to the device.  More details will be available this week at E3.