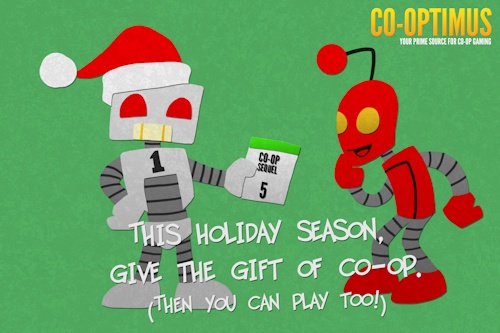 It's Christmas this weekend and that means plenty of time with family and friends for a lot of you.  It also means the perfect opportunity to get in some quality couch co-op gaming!  Here's what the staff is going to be playing this weekend during their time off.  We hope everyone has a great holiday and we'll see you back here on Monday!

Nick "bapenguin" Puleo - "It's the holidays so that means lots of co-op games with the family.  Rayman Origins I think is on the slate and possibly some playtesting of my XNA game."

Marc "DjinniMan" Allie - "Hoping to try out the Trine 2 demo and some more DC Universe Online, as well as a whole slew of board games with the family."

Mike "Pheriannath" Katsufrakis - "I'll continue my campaign of terrorizing the galaxy in Star Wars: The Old Republic, as well as liberal amounts of Dungeon Defenders, Team Fortress 2, and whatever fancies me in the ongoing Steam sale."

Locke Vincent - "I'll be picking up whatever STEAM is putting down.  Toss in some family Rockband and Rayman Origins with the family over the holiday. "

Jason "OrigamiPanther" Love - "As it is the holidays, that means gaming on the go so I think I'll be hitting up the PSP for some more Persona 2 and possibly MGS: Peace Walker."

Paul "EastX" Acevedo - "Skylanders and maybe some Kinect stuff for me. Merry Christmas, I say!"

Eric "smurphster" Murphy - "I hope to squeeze in some more Dungeon Defenders and I'll be doing a little gaming on the go with my new WP7."

Sam "Samoza" Tyler - "I'm off North for the Holidays so no games for me, except Monopoly and Getting Over Illness (tm).!"

What are your holiday gaming plans?