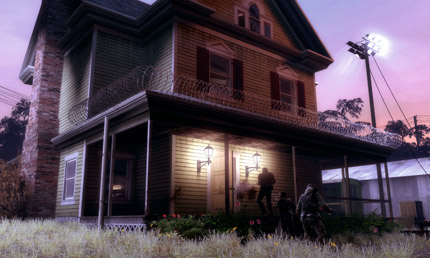 In case you missed it in the hustle and bustle of this past week's co-opapalooza, Joystiq has some impressions of Valve's Left 4 Dead (for the 360 and PC). The team at Joystiq seem impressed, particularly with the terror that the Infected (the zombies in Left 4 Dead) can inflict.

There were plenty of heart-stopping moments triggered by dozens of zombies flooding in through doorways, or even just a few springing out of a dark corner. It soon became clear that sticking together as a group was vital to taking the hordes down as quickly as possible, but, as the game's devs have previously mentioned, The Infected are definitely directed to flock more furiously to lone Survivors.

So, check out their impressions, along with some great screenshots from the upcoming 4-player zombiefest.