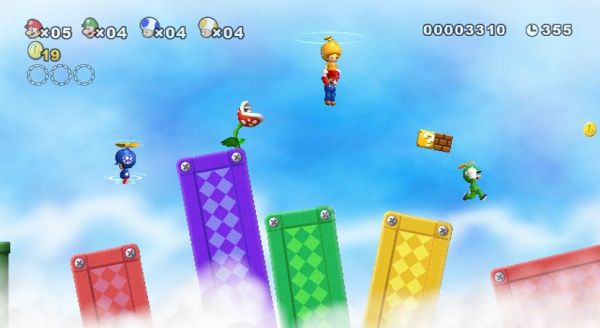 As you already know, New Super Mario Bros. Wii will feature 4 player co-op.  That's good.  Not so good is the confirmation that there will be no online co-op in the game.  According to Shigeru Miyamoto, the game is pushing the limits of the Wii's processing power already and online play wasn't feasible.  Disappointing news, for sure, but not really shocking.

Speaking of new Mario games, in all the hullaballoo of yesterday's announcements, we missed the revealing of Super Mario Galaxy 2.  Created initially from some leftover ideas from the first Galaxy title, Nintendo decided you can never have too much Mario and expanded it to a full fledged sequel.  Your wallet will be happy to know that Super Mario Galaxy 2 won't be coming out this year.  The launch trailer shows some spectacular levels, and the addition of Yoshi.  Co-op, as featured in the first Galaxy game, isn't shown in this trailer, but I'd be surprised if it was cut.  We'll be keeping our eyes on this one, but why not check it out yourself?