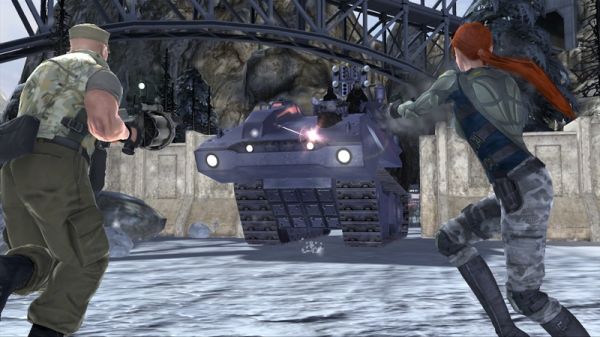 With summer blockbuster movies, for better or worse, come the movie tie-in games. In the case of G.I. Joe: Rise of the Cobra, we're happy to see Co-op, but very curious to know exactly how the game itself works. Kotaku got the chance to play the game at E3 using co-op, and we have their impression to share.

Basically, the first impression Kotaku shared was not promising. They let us know that the shooting element of this shooting game has drained all of the challenge by having infinite ammo and no reload. Strike one. Then, we're told the games animations look unnatural while the character spins to auto-target whatever is around them. Strike two. Finally, the melee, which I find necessary in most shooting games, feels weak and ineffective. Strike three.

We were curious if there were any redeeming qualities to this co-op title. It may not be much, but to those fans of the original G.I. Joe name, Kotaku found fan service.

"It's obvious that the developers have a strong understanding of the history of the franchise, and they're cramming the game chock full of G.I. Joe goodness. It might not be enough to excuse the game play as it stands, but it could at least make the game worthwhile to collectors and enthusiasts."

Unfortunately, it looks like G.I. Joe: Rise of the Cobra is exactly what we fear from movie tie-in games. Well, from a game based on a movie based on a cartoon based on a toy based on the 80's. Hopefully this is the result of an unfinished demo, and perhaps with a few months of polishing this title will be worth while to pick up. So far, players haven't been impressed.