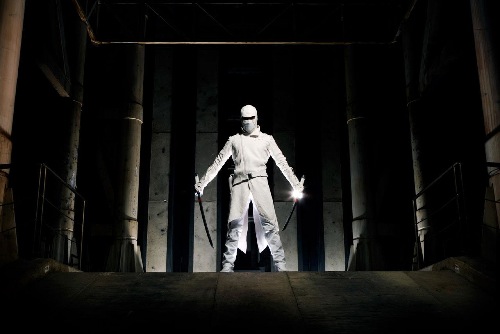 There's a live action G.I. Joe movie coming out this summer, one that's only about 20 years overdue.  With any summer blockbuster comes the inevitible video game tie-in, and the Joe movie is no exception.  As we previously reported, the game is being developed by EA, and will be available on the Xbox 360, PlayStation 3, Wii, PS2, etc etc.  You know, the usual platform bombardment.

While we've yet to see anything official of the game in terms of screenshots or gameplay video, Joystiq managed to sneak some ninjas deep into EA HQ to get some hands on time with the title.  If the trailer for the movie is any indictation, you'll be playing as a black latex clad Joe member through this arcade inspired title.

Of course it wouldn't be news to us if it didn't have co-op, and no member of Joe needs to go in alone.

G.I. Joe is much the brainless, hangover game you may plod through with a buddy on a late-rising Sunday afternoon. That buddy needs to be present -- like, next-to-you-on-the-couch present -- since EA hasn't confirmed online co-op (and seemed somewhat doubtful that it would include that feature in the final version). The entire game is played as a duo of Joes, with opportunities to swap characters from time to time. As a single player, one is able to switch, on the fly, between the two on-screen Joes. There's even a "Yo Joe!" co-op super move, which transforms our heroes into dudes (or gals) with one rocket launcher arm and one Gatling gun arm -- no, seriously. This newfound "ability" is a product of the movie-inspired "Accelerator Suit"

I have to wonder, if you play as Tomax and Xamot - if one takes damage to both players take damage?