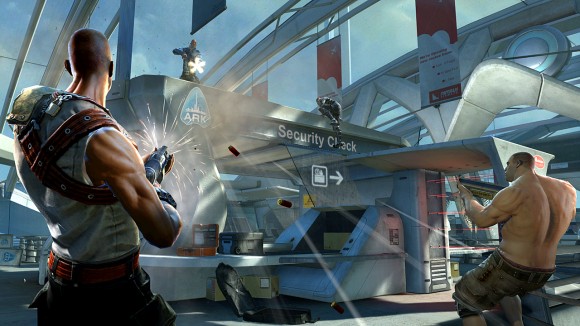 Brink, one of the few pleasant surprises at E3 this year. One that has a handful of great features, including Co-op, beautifully stylized visuals, a terrain defeating "SMART" system, and loads of others. With it's presentation, Lead Producer Paul Wedgewood gave a nice tour of The Arc.

What is The Arc? In the story of Brink, The Arc is what is left of Earth, set miles above it's destroyed surface sometime in the future. As with many futuristic societies, The Arc has a sort of Utopian feel to it. And with the way human beings respond to total order and control, there are rebels in its midst. In Brink, you start off as an employee of the Arcs security force, facing off against a resistance group that doesn't agree with how the government is run.

Taking the futuristic setting and putting it into effect, Brink uses an all new system when interacting with your environment. This system has been dubbed the "SMART" system, or "Smooth Movement Across Random Terrain" system.

"[This] system is programmed to analyze the terrain around you on the fly and allow your character to interact with it with the push of a button. To give an example of how it works, think of a recent game where a small pile of rocks impedes your progress and an invisible wall does not allow you to go past it. Not in Brink. Almost any direction can be used as a path to get somewhere. Obviously there are borders to an area that you are in, but you can go anywhere inside of that level if you can find a way to use it."

This sounds more than useful while exploring your environment, especially since some of the classes will use this to solve "puzzles" in the game.

"We started off as a general soldier trying to break through a bulkhead door that was the entrance to the camp. We were not having a lot of success with that, so on the fly, we switched to a scout type class that allowed our character to use the SMART system to go up and around the bulkhead, using stealth to our advantage. When you switch class types like this, your mission objectives change, and in this case we got a new mission arrow that told us to go around and hit the enemy from behind. These class switches can be done whether you are in single player or co-op."

Ah yes, our favorite word, Co-op. The co-op in this game is a fairly straight forward, drop-in, drop-out style. Only in the case of Brink, co-op is on a decently large scale. It was reported that 6 people were playing at once in this demo, very encouraging for members of Co-optimus! The team element allows players to utilize different classes they're comfortable with, as well as still being able to change their class to best suit the mission on the fly.

With the different classes, there is an upgrade system based around "prestige points" gained from each mission. The missions and prestige points are balanced based on difficulty. If the mission is more difficult, the reward of prestige points is higher. Completing each class-based mission reaps the most reward, ideal for a co-op setting.

We hope to see a lot more on this game as it's being developed, since what has been shown is very promising from a co-op standpoint. It was even boasted that while the game is being developed on PC, the PS3 and Xbox 360 ports won't have a secondary feel to them at all. Meaning, the experience should be universal across the board, which should make all platforms very happy campers.