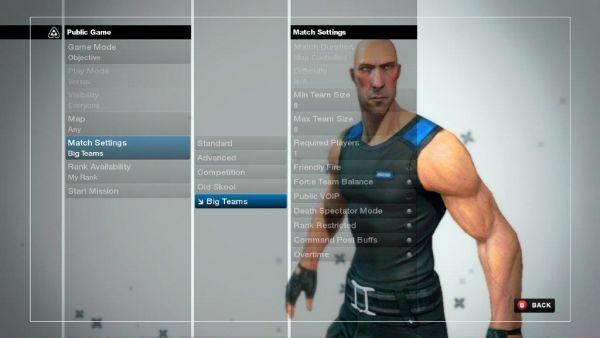 Brink has been out for less than a week, recieving mixed reviews.  Bethesda and Splash Damage have acted quickly to address some fan concerns.  Apparently, many gamers have experienced serious lag while playing online. To rectify this problem, a new update limits the amount of human players to 8 in Campaign and Freeplay modes. This applies to players "with lower upstream bandwith."  If you haven't noticed a problem with lag, you can connect via the "Big Teams" option in Free Play and Private matches, as seen above.  That will put you in 16 player games.  This update somehow requires no download, and is available now on the Xbox 360.  (I popped it in and it's there, as if by magic. No, no, don't tell me how they did it.  I like my world filled with wonder and amazement.)   It will go into effect on the PS3 when the PSN is up and running.  The PC versions is getting some fixes, as well.

To thank gamers for their patience, Splash Damage and Bethesda "will be making the first DLC for Brink available for free when it is released.  This DLC is planned for June and will offer additional maps and new content for players."  So we've got that going for us, which is nice. Special thanks to Shazoo for the tip. You can see the full announcement here.