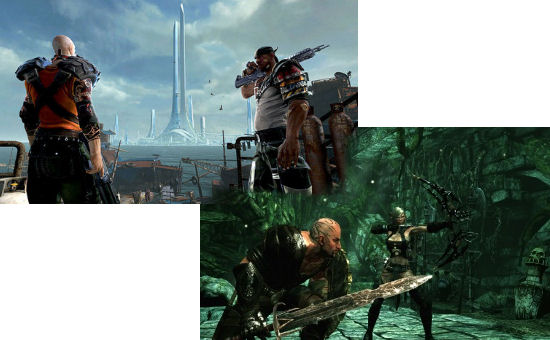 Bethesda continues with its news after yesterday's RAGE screens with an announcement of release dates for two other co-op titles slated this year.

Up first is the 8 player co-op shooter Brink on the Xbox 360, PlayStation 3 and PC;  it's dated for May 17th in North America and May 20th everywhere else.  We've been keeping an eye on this title for sometime, and while it was originally expected to release last year, its good to see Bethesda have allowed Splash Damage to give the game the development time it needs - hopefully it pays off with a tight cooperative experience with lots of re-playability.

Next up is Hunted: The Demon's Forge for the Xbox 360, PlayStation 3 and PC as well.  The two player co-op action/RPG will hit gamers hands on June 1st in North America and everywhere else on June 3rd.  Be sure to check out our hands on preview with the game as well as our interview with Brian Fargo about the title.

2011 is shaping up to be quite the year for Bethesda - two co-op titles within two weeks of each other this Spring, another co-op title in RAGE in September, and a new Elder Scroll's game, Skyrim, in November.