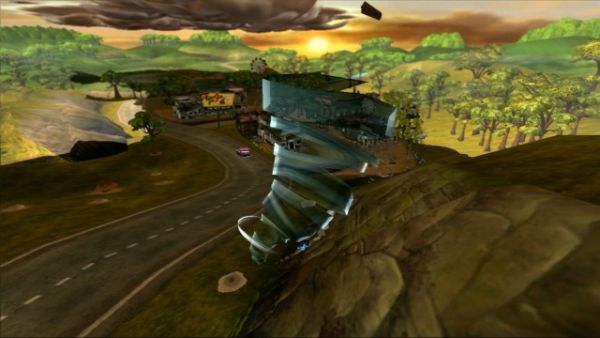 A wise man once said that it's easier to destroy rather than to create.  What the wise man neglected to tell you was that it's also a lot more fun.  That's the premise of Konami's upcoming title for the Xbox 360, PlayStation 3 and Wii.

The name of the game is Zephyr and it puts players in control of a tornado bent on the destruction of anything it in its path.  Trailer parks?  Done.  Cities? Toast.  Cows?  Buh-bye!

Combining a fun graphical style with silly missions, Zephyr looks to be a mash up of a Katamari game meets Helen Hunt in Twister.  Ok, so there's no Helen Hunt in Zephyr, but that would be totally awesome.

Konami promises the game will support two players for double the destruction in co-op mode, though it's unclear whether or not that's online, offline, or split screen.