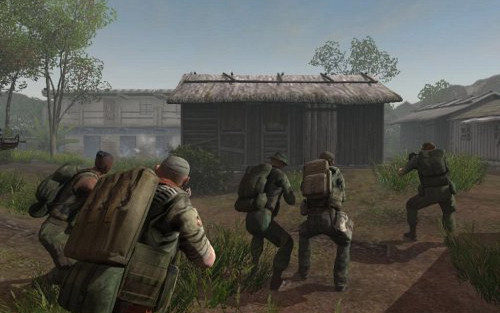 When Raven Squad was announced, we had high hopes for the title in terms of it's cooperative gameplay.  The game features the ability to switch between a first person shooter style game and an RTS style game on the fly.  Better yet, in co-op each player is free to play each view independantly allowing for some interesting strategy.

With all of this in mind, I jumped into a game with another one of the developers, who was playing co-op with me.  Yes, the full campaign can be played co-op with a friend via the Internet or System Link.  The first thing I had to try was the RTS to FPS transition.  Simply pressing a button transitioned me with a quick zoom to one of my squad members.  You can easily switch between members by using the left/right d-pad selector, while up/down will change you between squads if you are playing single player.

The real advantage here is gamers can play to their genre of choice, allowing their strengths to present itself.  For instance, Mike sucks at RTS games.  Especially on consoles.  And me, well I suck too - but I suck less.  So perhaps with me controlling the overall battlefield view and him taking up the FPS view we can maximize our effectiveness.

Raven Squad is set to hit the Xbox 360 and PC this August.