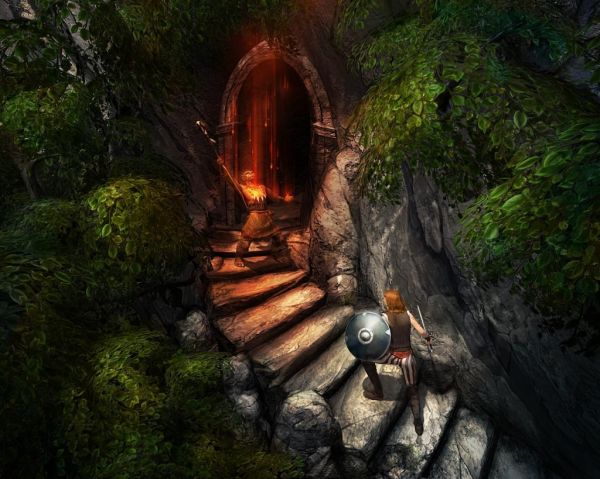 Stow those poly dice, fire your GM, and warm up your computer for some new "tabletop "action! Silver Style has adapted the popular German tabletop game, Das Schwarze Auge into a phenomenal looking action RPG now dubbed The Dark Eye: Demonicon. Since we haven't had much information state-side on this title, Gamebanshee sat down with Silver Style's developer Carsten Strehse for some details.

The story takes place in the Blacklands of Aventuria, where we have a hero who's best friend is abducted by "an evil church". While sounding fairly ominous, we're assuming this means danger lurks around every corner, and our hero will be pitted against the odds to save his/her best friend. Well, the world will be a bit bigger than that, but this is the primary storyline. Carsten elaborates how much more there really is to this game.

"Our goal is to create a game world with as much variety as possible, so we divided Demonicon into two large parts: Perricum and the Blacklands. Both are very well-known regions of Aventuria that could hardly be more different from each other. Whereas Perricum is rather urban with major settlements, the Blacklands are a dangerous, barren area where terrifying monsters are walking abroad. All in all, the Blacklands are the perfect choice to convey the gloomy, threatening atmosphere of Demonicon."

Visually stunning, with a unique world is something gamers tend to appreciate. Another thing we look for is original gameplay. Silver Style is working on a whole new gameplay engine unique to Demonicon, just to be sure everything works just the way it needs to.

"Opposed to a middleware solution, using a proprietary engine we can make sure that the tools we use are perfectly fine-tuned to the game and that all involved, from our artists to our level designers, can achieve the best results. Our engine supports all the important rendering techniques, such as HDR, parallax (occlusion) mapping, ambient occlusion, or soft shadows. We also employ a new technology for texturing terrain surfaces that allows us to achieve a high viewing distance without having to abandon details like normal maps, relief maps, or reflection effects. Another important argument for a proprietary engine was the rendering of realistic character movements. In this way, characters in Demonicon are not just controlled by predefined animations, but can correctly interact with other characters and their surroundings."

Along with making an engine specifically for this game, Silver Style boasts a "perfected AI" system to make the NPC characters wholly believable and as "alive" as possible. Additionally the day/night cycle system will integrate the AI into the game further. AI characters, and animals will behave differently at night. This is promising for the future of realism in games, and it all starts here.

Our favorite bit of information is the co-op, which is happily confirmed for Demonicon. Not only will there be a co-op mode, but it will be on a massive scale, bordering MMO status.

"Especially in a role-playing game, you have to deliver more than just a simple deathmatch mode. That’s why in Demonicon, we provide the possibility to play the single-player campaign cooperatively with up to eight players. Apart from that, we’re planning additional, multiplayer-only quests and an arena mode for PvP."

While the game is confirmed for a PC release, Carsten mentioned "gaming consoles" as well, when talking about possible DLC in the future. This opens up possibilities for an Xbox 360, and PS3 release at some point.

"Naturally, a game like Demonicon is predestined for exclusive items or bonus quests that can be downloaded separately. Of course, we will provide uncomplicated access to this additional content for owners of gaming consoles and PCs as well."

8 player fantasy RPG co-op sounds like just our cup-o-tea, naturally. Thus far, The Dark Eye: Demonicon has more than just caught our attention. We'll be keeping an eye out for more information to share as it becomes available!