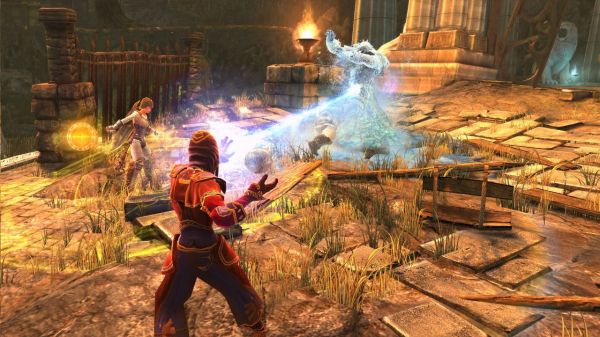 Part two of my appointment with Perfect World Entertainment was for the other F2P MMO they have in the works: Neverwinter. This is a title I’ve been excited about every since it was announced, but it’s gone through some big changes since that announcement. The developer from the start has always been Cryptic Studios (the guys behind City of Heroes/Villians, Champions Online, and Star Trek Online), but they’ve changed publishers. Also, I was originally under the impression that it was intended as a multiplayer game, and now it’s a F2P MMO. I won’t lie - I was a little nervous about some of these changes; it turns out though that my fears were unfounded because the game looks absolutely great.

Cryptic’s own chief operating officer Craig Zinkievich and lead producer Andy Velasquez talked me through the demo. Neverwinter is an action-based MMO, meaning that you target your abilities with the mouse (which in turn means that mouse-look is constantly on). At-Will abilities (which have no cooldown) are mapped to your left and right mouse buttons while Encounters (skills that are a bit more powerful and have cooldowns) are mapped to easily accessible buttons like Q and E. There are also Daily Powers, which are extremely strong abilities that you must charge up your Action Points to use (these are mapped to number keys). Having fewer skills available at a time (compared to a standard MMO) is certainly intentional. That way, players can focus on the action and their characters movement, and not have to worry about their UI. Don’t worry about only being stuck with the same handful of skills, however. A wide variety of skills will be available, but you just won’t be able to have them all equipped at a time. Craig and Andy told me that players will be able to swap around their skill setup for free. Right now they’re utilizing conveniently-located campsites as the areas where players can do this, but it’s not final. They just want to make it so players can easily change around their setup, but not be able to do it while they’re in the middle of a fight, or inbetween groups of enemies when they’re out in the world.

While Cryptic hasn’t announced exactly how many classes they’ll be launching with, Craig was happy to divulge that they’re focusing a lot on specializations. So there’s a huge difference between a Control Wizard and a Battle Mage, for example. If you start off the game as a Control Wizard, you won’t be able to turn into a Battle Mage “without something drastic happening.” D&D vets may also be pleased to note that Neverwinter will also include Feats. Some of these will be along the lines of the standard D&D passive feats, while others will strengthen specific abilities. One thing that really struck me about Neverwinter was how polished the game was. I don’t just mean graphics, but all the things that Cryptic is already incorporating into the game. Craig and Andy stressed that they’re always pushing themselves to make the “user experience” even better - and it shows. For example, there’s already an interface that will tell players what events are going on or upcoming in the world. Players will be able to set reminders for themselves for these events. The game will also be launching with a full matchmaking system for party encounters so people can easily get together and finish the dungeon for an area. Also, the Foundry (which has been available in Star Trek Online for awhile now) will be in on launch, allowing players to create quests and missions within the game for other players.These things may not seem awe-inspiring, but it’s this kind of stuff that all MMOs realize they need and patch in several months to a year after launch. It’s very impressive that Neverwinter is launching with it.

To sum things up, what I saw from Neverwinter at PAX East completely exceeded my expectations. It looks fun, fast-paced, and it’s clear that Cryptic is making a game they’re passionate about. The game will be free-to-play with a Cash Shop (which hasn’t been worked on yet), but users won’t be locked out of content if they don’t choose to utilize said shop. It’s scheduled to release late 2012 with closed beta starting up sometime between now and then.