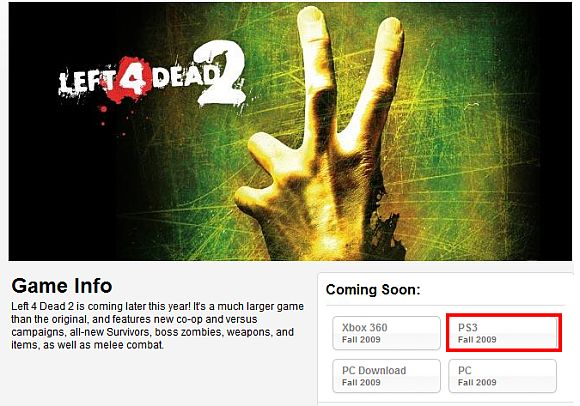 There was a lot of fuss last year when Left 4 Dead was released for the Xbox 360 and PC.  So much so that rumors consistently flew around that a PS3 version was in the works.  Yet, despite the strong rumors, the game never saw the blu-light of day.

With Left 4 Dead 2's announcement fresh in our minds, lets throw some more logs on the rumor fire.  This time Joystiq points out the official Left 4 Dead 2 game page on EA.com (the game's retail publisher) lists a PlayStation 3 version as coming in Fall 2009.  While this isn't an official confirmation, it's more official than what we had with the first title.

Update: And the merry-go-round continues.  The listing has been updated, and the PS3 version is no longer listed.