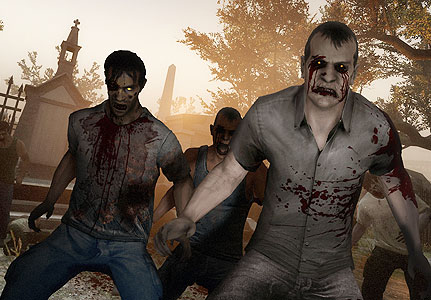 I've been to the Ninth Ward of New Orleans three times -- the first time just five months after hurricane Katrina ravaged the city -- and can attest that the weather is pretty much always gross. Houston isn't much better, but if Left 4 Dead 2 had been set in southeast Texas, the ammo piles and assault weapons would be so close together survival would be a cakewalk. Thus: New Orleans, and better for it.

Good thing for the infected, then, that Valve writer Chet Faliszek has confirmed region-appropriate clothes and appearances for the familiar enemies, in addition to the new Special Infected announced in past previews.

One of the weird things with Left 4 Dead 2 is that we're not showing a finished product, yet it plays like a finished product, so all those guys are getting re-skinned and remodeled. They're going to be mutated to the area -- it's the South, it's a little hotter. A guy running around in a hoodie is gonna be a little rare. We haven't shown that yet, we're gonna be showing it ... actually I don't know when we're going to show it, but it'll be shown before release.

Look, I know that they're just video game villains, okay? I love the subtle details.

Now if they would just move past the zombie threads and onto explaining how the melee weapons emit flashlight beams....