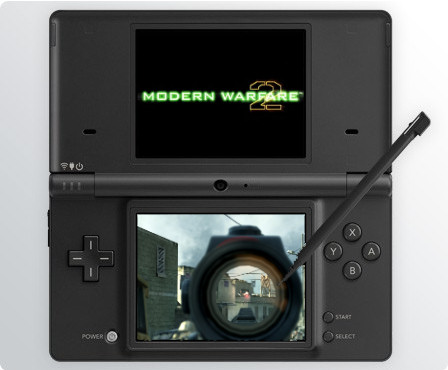 The game is set to feature building to building combat, UAV control, tank control and the ability to man the AC-130 gunship.  It's unclear if the game has co-op play, but apparently the six player multiplayer mode was so awesome they named it twice in the press release.

We only mention the game because of this:

...as well as the brand new Survival Mode, giving players a variety of weapons to hold off waves of oncoming enemy forces

Sounds a lot like the ever popular growing Horde-style modes we are seeing in games.  Ones that are traditionally co-op.  We'll be keeping an eye on this one and let you know as soon as we have official word on the co-op mode.

London, UK– 3rd August, 2009 – On the 10th November get ready for more high-speed action, as Activision Publishing, Inc. revealed plans today to deploy Call of Duty: Modern Warfare: Mobilised for Nintendo DS™. Developed exclusively for the Nintendo DS by n-Space, Call of Duty: Modern Warfare: Mobilised will deliver an arsenal of cutting-edge weaponry, vehicles and tactics, arming players with precision controls for battle across the world’s most dangerous hotspots. Gamers will fight on the ground in intense building-to-building tactical combat, hack into enemy computer terminals, take the controls of military vehicles like Battle Tanks and UAV spy drones, or man the guns of an AC-130 gunship.

Call of Duty: Modern Warfare: Mobilised will bring the epic Call of Duty intensity of Modern Warfare to Nintendo DS fans through a unique storyline and companion narrative. The title will also serve up a array of features, including a six-player online multiplayer mode that allows friends to host their own server, as well as the brand new Survival Mode, giving players a variety of weapons to hold off waves of oncoming enemy forces and an expanded six-player online multiplayer mode. Also, Arcade Mode will allow gamers to replay the game’s single-player with a time limit and running score, with extra points awarded for specific achievements.

Call of Duty: Modern Warfare: Mobilised will release worldwide on 10th November, in conjunction with Infinity Ward’s highly-anticipated Modern Warfare 2, the next instalment to the record-breaking Call of Duty series and is rated 12+ by PEGI.