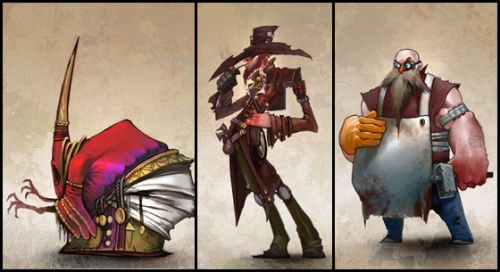 Indie game Nekro has successfully reached its funding goal on Kickstarter, but with less than two days to go, there's still a chance to influence some content in this game.  The concept of Nekro is simple - play as an evil necromancer and wreak havoc on the world.

In Nekro, you are the bad guy; a powerful necromancer able to create unthinkable horrors out of the twisted lifeless corpses of your enemy. Blood is your fuel; razing towns and slaughtering anything that opposes you is your creed. Even though you are evil, the humans of the land are corrupted, and will stop at nothing to wipe you out. You will face many enemies and challenges in the world of Nekro.

The original funding goal was $100k for the project, having achieved that the team has set a new goal of $140k.  What happens if they reach it?  Why co-op of course!

..we picture co-op being an extension of single player where players can drop in and join a single-player campaign already in progress. (With the permission of the host, of course.) By integrating the multiplayer into the single-player experience we are essentially offloading all of the huge undertakings that multiplayer entails.

The team has two variations on co-op play listed up and it seems they are willing to listen to community feedback as to which one would be better.  There's lots of goodies still available for backers as well - like having your name on an in-game Tombstone, digital and physical art books, and much more.