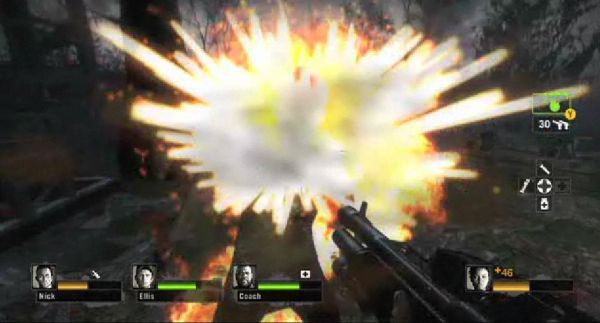 Valve revealed in last night's GameTrailers TV preview that a new area we'll be visiting in Left 4 Dead 2 will be a carnival! Officially called "Whispering Oaks", the creepy amusement park is the centerpiece of the latest campaign to be revealed: The Fairgrounds. Along with the campaign news comes the world debut of the katana, yet another melee weapon (magical flashlight beam included). We've got the video embedded for you.

Not everyone has been as excited by fresh sequel news, however. To placate the masses, Valve is still pushing DLC through the door for the original Left 4 Dead, as we covered earlier. An Edge Online interview with Chet Faliszek of Valve teased possible compatibilities of the DLC with Left 4 Dead 2.

We’re still struggling with how interoperability is going to work, right now. When we talk about L4D, the story stuff – there’s actually a lot of character dialogue that’s based in each map.
We have a world sketched out and we have an understanding of where everything is and what’s going on, you know, so story-wise it wouldn’t make much sense. But equally there’s a whole group of the fans who don’t care. So we could put new characters in old places and old characters in new places.
There’s a lot of back-and-forth. We haven’t fixed on what we’re doing yet, so we don’t want to talk about it and make people think something is going to happen when we don’t know ourselves.

I'd love to see "interoperability" -- as they call it -- of DLC with Left 4 Dead 2, but only if the new characters, weapons, and new Infected were transferred to the Crash Course campaign. I have no problem swapping discs to play as the original characters and with the current weapons.