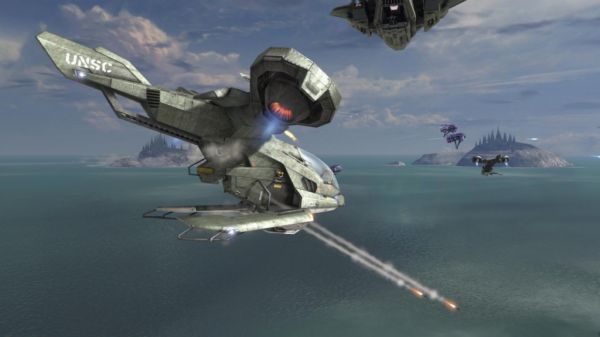 Last night we had our first Halo 3 Co-Op night in over a year, and I think most of the staff can give it a resounding success.  We've uploaded some photos of the action, and posted some recounts from the staff members who played.

Did you join up?  Did you find some new friends thanks to our co-op night?  Did you have FUN?  If so let us know!

Me and my youngest hooked up with a couple guys for some Legendary co-op.  The lag was pretty heinous, but it was fun.  After an hour and a half, I got my typical Halo headache, and passed the controller over to my oldest son.  Wish Halo 3 supported three players locally in campaign!

The moment of the night for me was when I chucked a plasma grenade at a hammer-wielding Brute and one of our co-op partners ran right into it and got stuck.  The resultant "Did one of you guys stick me?!" was hilarious.  I  had to cut my time short, but I had a lot of fun.

I would like to deem Halo 3 night a great success! After playing with about 3-4 different groups (with some shuffling in between) on Legendary, finding a few new skulls, and learning that there were a lot of achievements added on - I may be playing a bit more of this to come! Thanks to everyone I had the chance to play with, and my apologies if you were left out of  my groups (hopefully you found someone from the site to game with!)

The Halo 3 co-op nights are pretty crazy, aside from trying to manage all the incoming messages and friend requests  - you need to try to PLAY the game.  Hopefully people that were ignored don't take it personally!  That being said we had a couple of great runs through various missions - though getting stuck on the double Scarabs was a biotch.  The group persevered though and managed to kill them after about 30 minutes.  There was plenty of "oh shit" moments, but my favorite had to be the aerial attack we had in the hornets.