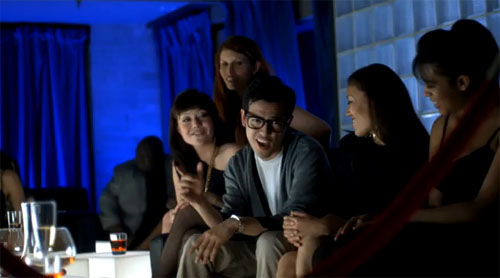 With music games this fall coming out that cover Rock, Pop, Classic and Techno music, you'd think the market is saturated enough.  But there's one genre that's been sorely missing from music games in general, and that's Rap/Hip-Hop.  Enter Def Jam Rapstar.

The game is being co-developed by 4mm Games and Terminal Reality with a target winter release.  Def Jam Rapstar won't just be about your solo performance waxing it lyrical.  Instead the game is going feature an in depth social experience branded with your own image.  Using the PlayStation Eye or Xbox Vision Camera you'll be able to create videos and perform for the entire world.

There's a few cooperative modes available including pass the mic and a combined scoring mode where both players rap at the same time.  There's no word on any tracks other than the one that's featured in the debut trailer - "Put On" by Young Jeezy.  But the game promises to represent over 30 years of hip-hop music.

Finally if you think you can lay down some lyrical poetry of your own, the game will feature a free style mode, guaranteed to entertain at parties.  My only hope is they go for the mature rating and allow uncut versions of the songs.