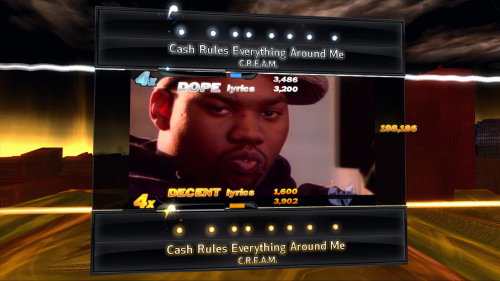 It's been some time since we've heard about the movement of Def Jam Rapstar, and it appears it'll be sometime before we can all show our lyrical skills rapping smooth syllables into the silver chromed grille of a microphone.  While the game has been in development for some time, it has been without a publisher.  Konami has announced that it will co-publish the game in North America along with new comer Atomic Games.  You'll also find the game on the Wii now, alongside the Xbox 360 and PlayStation 3 versions.

The game will support a two player local co-op mode in various formats like duet and pass the mic.  I'm pretty sure when people rap together though, they don't call it a duet, that's sounds too wussy and not expensive enough.  I think Hip Hop performers usually call it "featuring"  when people perform together.

Anyway... Def Jam Rapstar will also feature camera support so you can record yourself making a total a...umm...star of yourself and upload it to the DJR community.  Then everyone will want you featured in their next rap video!

But really all you need to know is the first official tracks have been announced and on the list is "Nuthin' but a G Thang" by Dr. Dre featuring Snoop Dogg.  See that, featuring.  The Dr. knew all about co-op, even back in the day.