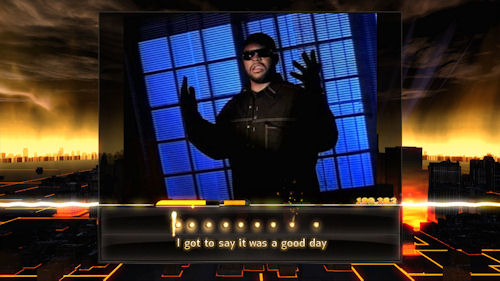 As someone who's a huge fan of 90's rap music, the name Def Jam is synonymous with quality like Ice Cube, Dr. Dre, Snoop Dawg, Wu-Tang Clan and many, many more.  So it should come as no surprise that many of those above artists will be featured in the upcoming game Def Jam Rapstar - the first music game devoted to Hip-Hop and R&B music.  In our behind closed doors meeting with 4MM Games at E3 we got a in depth look at what the game will offer.

The first thing you'll need to know about Def Jam Rapstar is how it works.  Since rapping isn't necessarily about pitch, but rather about beat and spoken word, the game uses a phonetic detection system to verify the words coming out of your mouth.  There's no room for fudging or mumbling here - and there's a nice touch of actually seeing which words you missed after each song on a lyric sheet.  This will help you improve, and memorize, the songs.

The songs themselves can be sung solo, as well as a battle fashion where players compete for the highest score, or finally in a co-op duet mode.  There's also a free style mode with preset beats and options to allow you to record your own raps.  This mode even allows multiple tracks and options, so if you want to go back in and lay over another vocal track you can do that.  Any of your performances, including the freestyle ones, can be recorded with a PlayStation Eye or Xbox Live Vision camera, edited with effects and cuts, and then uploaded to the Def Jam website.  It's here the whole social aspect of the game takes hold. On the site itself players can rate performances, share videos with anyone on the internet, and enter into crews (think clans) to compete with other crews for rap supremacy.  Free style rappers can get hand picked by talent searches as well looking to sign the next big thing.  There's some real potential here to use Rapstar not only as a game, but as a tool.

The game plays and looks about how you'd expect a karaoke style game to play, though one nice feature is that every song in the game does have the official music video for it.  One surprising thing is most songs are the edited version on the disc as 4MM is going for a T rating - but you won't be penalized for singing the "real" lyrics.  We've been told that the DLC won't have many of the same restrictions as the disc - so perhaps we'll see unedited songs there.

You can use any microphone you already own with the game - Guitar Hero, Rock Band, Sing Star, Lips, etc - so there's no need to buy any hardware.  We do hope to see a special edition of the game though with a giant gold dollar sign attachment for the microphone, so we'll keep our fingers crossed.

Def Jam Rapstar is set to hit the PlayStation 3 and Xbox 360 this fall.