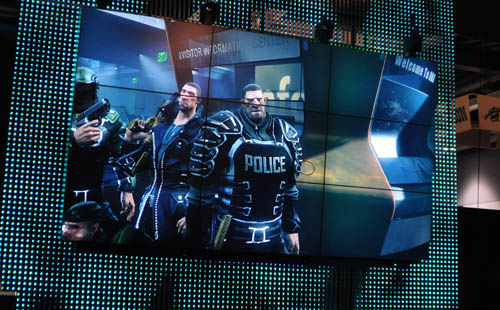 Splash Damage was demonstrating their upcoming action game for the 360, PS3 and PC called Brink in the Bethesda booth at this weekend's Penny Arcade Expo.  Brink is a stylized action title set in the near future in which players assume the role of one of two sides of an ongoing battle.  Choosing between the Resistance or the Security, players are given dynamic missions, complete character customization, and best of all 8 player co-op as they progress through the story.

We saw the game using it's new SMART system which allows for unique player movements with a simple button press.  In order to get past a security gate players simply hold a button, engage the system and run towards it.  Either hold up or down on the stick will make the SMART system do something different - we saw the developer make is way by sliding under the security gate and by climbing over it.  It's sort of like Mirror's Edge with some auto platforming elements.  It makes for some really slick moves while in battle.  In certain battles the developer was jumping between shipping crates, diving and sliding for cover, and just generally kicking ass using this system.

After this brief demo it was onto the character customization screen.  Players can choose body type, head, hair, race, clothes, etc to make their character their own.  Clothing, tattoos and other material are unlocked by earning experience, making you appear more badass as you become more badass.  The really unique thing that Brink offers is that your character customization effects your gameplay - choose a big body type and you can absorb damage at a movement penalty.  Pick a skinny guy and you can run faster and jump farther.  All of these customization looks really slick in the game's sort of comic book style meets Gears of War graphics.

Once onto the mission, the demo showed how different player classes are available.  Each class has specific moves and items it can use.  An engineer can repair a crane or place a turret.  A medic can heal, and an operative can sneak and use stealth.  It was unclear how many classes there were - perhaps around eight - and all of these classes can be changed on the fly at different terminals.  Why would you want to change a class?  The game's mission system allows players to choose at any time what they'd like to do for various levels of experience.  The harder the mission, the more experience.  If the mission you want to choose isn't right for your class - perhaps repairing an object, it's simple to switch on the fly.  Of course when playing with 7 of your friends you'll most likely have someone filling the shoes of said role.

Brink will support full drop in and drop out 8 player co-op online.  Team members will be able to work together on missions, give out missions to push the objective along, and earn experience to their persistent character which they can take back offline to their own game.

Everything we saw from the demo was really impressive, especially considering the game isn't due for release until sometime next year.  Brink looks to be one of those standout co-op titles that came out of no where.