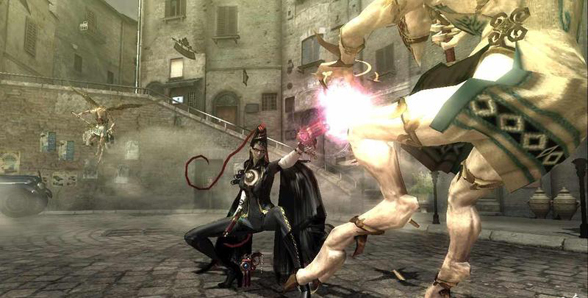 Bayonetta is an action game in the vein of Devil May Cry, only it takes a lot of it’s own artistic liberties at the same time. Bayonetta is a witch with guns in her hands and strapped to her boots, and loads of backup melee weapons.

Bayonetta has a few unique qualities aside from her guns and oversized swords. First, her outfit is made of her own hair, fitted like a leather cat suit. As she uses her magic attacks, her hair gives her power - becoming far too distracted to maintain the outfit rouse (Bayonetta wears less as you use more magic or effectively string combos together.)

If you get a nice solid quick time event combo, her entire outfit becomes a dragon of sorts, and Bayonetta stands in front of you on the screen all but nude. Tastefully done, and brilliantly animated, your dragon will munch on boss enemies to ensure mass destruction.

Instead of collecting orbs in this game, Bayonetta collects halos. The higher the combination you deliver, the more Halos Bayonetta picks up. She uses these halos later to purchase upgrades, and weapons to be used in the game.

Bayonetta is brilliantly smooth to control. Her attacks are rapid and succinct, blasting away at enemies from all angles with devastating force. She gets bonuses for blocking at the last minute, slowing down her enemies movement to attack them from any angle. Speaking of angles, the camera in Bayonetta is much more forgiving than Devil May Cry.

Her double Jump gives Bayonetta butterfly wings, and she is able to maneuver a bit mid-air to get around enemies. In certain parts of the demo, you were able to change from running on the ground, to running on the walls and ceiling to take care of those pesky demon/angels with the push of a button.

As much as it’s not Devil May Cry, it’s the only thing this game can be compared to effectively (it even had some amazing taunts!) Bayonetta is still it’s own beautiful entity, and I for one cannot wait to play the full version!