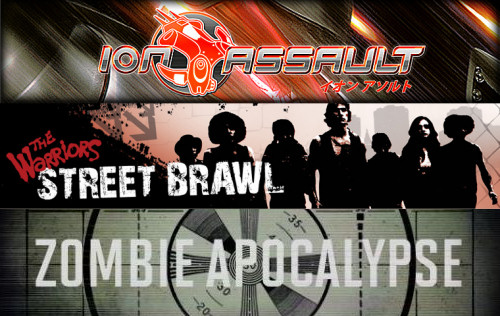 Last week we thought we had two co-op games on the Xbox Live Arcade, when in fact there was only one.  This week we're pretty confident that we have three co-op titles making their way to the Xbox 360.  That more than makes up for it in our book.

We already told you about the four player co-op zombie slaughterfest, Zombie Apocalypse, over the weekend.  But two new ones have popped up making this a very busy week for co-op gamers on the 360 - especially considering ODST hits as well!

First up is the new Warriors title called The Warriors: Street Brawl, and much to our surprise the game not only has offline four player co-op but online as well!  There's some joke here about coming out to Plaaaay or something, but we digress.

Last is a game called Ion Assault, a game that has some absolutely gorgeous visuals.  It looks part Geometry Wars, and with a 2 player online or local co-op mode, it may just become as addicting.

All three titles are 800

each and will be released on September 23rd.