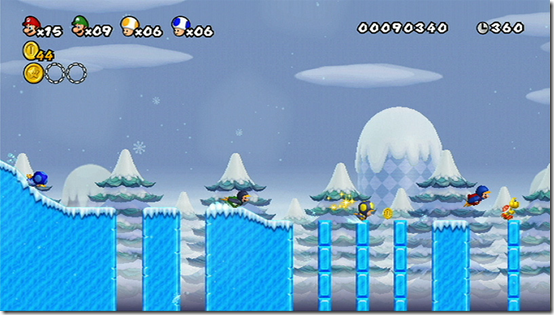 As always, the holiday season is jam packed with great new releases.  For the Wii, one of the biggest co-op titles we're looking forward to is New Super Mario Bros. Wii.  A return to the classic platforming gameplay of the well received DS title, NSMB Wii features four player co-op.  Another feature of the game, somewhat mysterious, is "Demo Play".  Originally, indications indicated that "Demo Play" was "hold left on the D-Pad and the game plays itself for you".  Apparently, it's not quite that simple, according to SiliconEra.

Here’s an excerpt from NOE’s product page. Note the bolded section, emphasized by us.

New Super Mario Bros. Wii is also the first Nintendo game to feature a dynamic help system, which allows you to access a mode showing how a level can be completed if you are stuck. The best thing about this mode is that you are free to jump into the action you’re watching on screen at any time!

So, instead of the game beating a level while you grab a snack, it shows you what moves to make and you can mimic what happens on the screen.

Details are still a bit hazy, but I think its safe to say it won't cheapen the experience in any way, and the player will actually have to do the actual "work".  The hardcore gamer might mock "Demo Play", but considering the casual/younger audience that the Wii has, it sounds like a great idea to us.