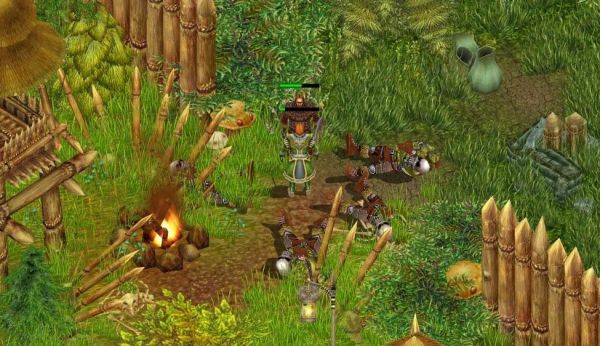 Din, champion of the Gods, is not pleased with you one bit. You were not very nice in your life, and have now been cursed to live out a second life chock full of redemption. You're charged with being a savior of mankind, and will roam the plains of Western Aleria until Din is satisfied with you. It's not all dark and dreary though, as Din's Curse will give you a dynamically changing world to Action/RPG in with unique quests, different townspeople, and new locations every time you start a new game.

Gameboomers.com has interviewed Steven Peeler, creator of Soldak Entertainment who are responsible for the development of the Co-op Action/RPG Din's Curse. We wanted to know what this game has that other Action/RPG's don't, so we're sharing what we've learned.

First, any Action/RPG game has some kind of class system, and Din's Curse is no different. The class system is something Steven Peeler seemed very proud of, so we'll let him explain it in his own words.

"The leveling itself is fairly typical with experience, levels, attribute points, and skill points. I'm pretty excited about the class system. We have six main classes in the game which each have three specialties (18 total specialties). However, the interesting twist is that we also allow hybrid classes. You can either choose a full class and get access to all three of its specialties or a hybrid class with ANY two specialties. This comes out to a whopping 141 class combination's you can choose from.

Picking a full class or a hybrid is a matter of choosing which weapons and armor you want to be able to use, which skills you want access to, which attribute/stat bonuses you want, and the type of mana regeneration that fits your play style the best."

Aleria is the realm where all the action takes place, but what does that mean, exactly? As we understood it, there was a lot of random generation for locations, quests, and even people in the towns. This should be intriguing to those that played Diablo enough to have the maps memorized - mix it up a little, we think co-oppers will enjoy this style very much.

"The environment is randomly created and randomly populated with items, monsters, quests, and objects that are appropriate for that particular area. You will never see the same setup multiple times.

Once setup though, your actions, NPCs' actions, and the monsters' actions are what progresses the game. If war is brewing and you are asked to stop it before it breaks out, your actions really will impact what happens. If you are successful, you will save the area from becoming a war zone. If you fail, the area will be ravaged by a war. Players need to remember that lack of action is also an action. If you don't stamp out an uprising in time, they will likely find something interesting to do, like raid the town.

From the creative side of things, this type of game is a bit different from creating a linear game. In a linear game, you have full placement control and you are explicitly setting up interactions, so you know what to expect. In a game like ours, just about anything can happen. I have to think about all of the pieces individually and collectively. Is this going to be fun and cool? How is this going to impact everything else? If these two objects are placed next to each other will they interact like the player expects? What happens if the player ignores this quest for too long? What happens when they succeed? What happens if they fail a quest? Can they fail this quest? In general, how does this quest lead to other quests."

With so many possibilities we can see some strong co-op strategies coming out of something like this. Din's Curse is still in development for Mac/Windows, and we'll hopefully hear more about the game and it's co-op as it becomes available!