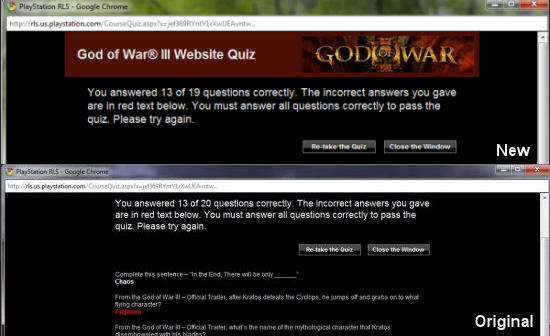 Sometimes it sucks being right, but it looks like that was the case when we posted about the possibility of online co-op play being in Sony's upcoming game God of War III.  The source was an official Sony retail training program, which contained a quiz for the game.  In the quiz we were asked - "Will God of War III have Online Cooperative Modes?"

The correct answers was yes, but it seems - as we correctly predicted - someone put in the wrong information on the training site.  IGN got a quote from Sony on the rumor:

"This news is unfounded, God of War III will not have an online co-op mode."

Unfounded?  Not quite.  There's visual proof it did actually exist, as anyone could have logged into the site and checked for themselves.  As you can see from our screen captures above there are now 19 questions instead of 20, with the co-op question being removed.

It's either a case of some miscommunication between whoever runs the site for Sony, or someone who got a little too hopeful and decided to have some fun.  Either way we're sad to not see co-op with Kratos.  Hrm...that sounds like a good sitcom.