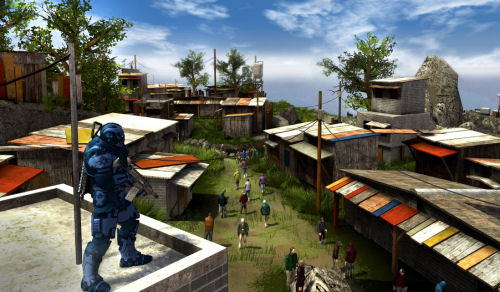 Now that the fall gaming season is wrapping up, it's time to start hyping the games of next year.  One of the biggest releases next year for co-op gamers will be Crackdown 2.  Players will return to a changed Pacific City, once again assuming the role of an elite super human agent.

So while the setting will be the same in some sense, there's quite a bit changed in the game itself.  The biggest, and best addition, is four player co-op play throughout the entire campaign.  Just imagine the chaos of four super human agents tossing vehicles at swarms of bad guys.  It does't look like we'll get a game that's automatically scaled based on the number of players, instead the difficulty will be a player's choice.

Billy Thomson:  We had two choices. We could have gone for dynamic balancing of the AI, which I think causes a lot of problems. This of this scenario: you’re standing at a corner, and you’ve got three guys round the corner, and you’ve got an Uzi. You run round the corner and mow the guys down, and you take very little damage. Now, if we did dynamic balancing, and you add three more players to that game, and you run around another corner and meet the exact same three AI and we’ve upped their health and upped their damage, then your experience from corner to corner is going to be completely different.

So what you’ve just taught the player – that you can just take down three guys in an instant and not need to worry about health – you’ve just changed at the next corner. I think that’s a big issue. So we’ve gone in a slightly different direction, which is to allow to player to balance the difficulty themselves.

Other tweaks for co-op players include vehicles that are designed for two or more passengers.  It's still unclear whether or not the second, third, or fourth player will be able to shoot from the vehicle, but there will be vehicles with turrets.  I'm sure players will fight for control of the radio was well. While things on the surface might be somewhat familiar, Crackdown 2 will feature nine huge underground locations.  These, presumably, are where you'll be fighting those infected freaks.

Billy Thomson: They’re cavernous, basically. They’re not like jumping into a room. It’s funny. They’re interiors spaces, but they still feel exterior. It’s just the skybox is different; it’s a rocky sky instead of a starry sky. It’s big, and there’s still a lot of verticality within these spaces. It’s similar.

Not much else is known about these areas, but it seems they'll play a major part in the game.  Each area is said to be the size of one of the bigger boss zones, like the Refiner from Crackdown 1.

How about some more content though?  Perhaps an 8 player co-op survival mode.  Yeah, they got that.  And while many think the inspiration came from Firefight or Horde, it's actually from another co-op game -  Smash TV.  My interest just got turned up to 11.

There's a ton of information out there in the VG 247 interview with Ruffian Studios.  New orbs, hand to hand fighting, and more can all be found  in Part 1 and Part 2 of their interview.  And don't forget to check out the new screenshots.