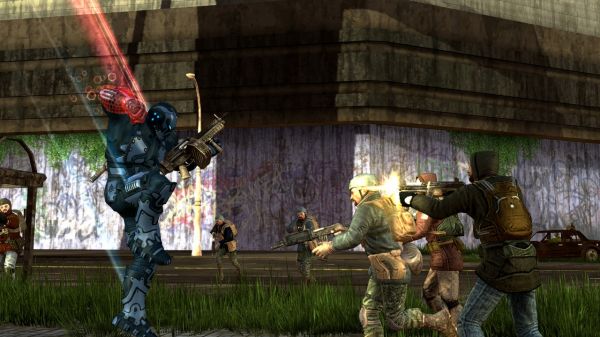 Computerandvideogames.com posted an interview with James Cope yesterday in which the Ruffian Games producer, and former employee of Crackdown dev Realtime Worlds, discussed what players can expect from the four player co-op in the upcoming Crackdown 2.  James' description is very similar to what he stated in a previous interview, so it's good to know they're still focused on this idea of allowing you and your buddies to tackle a much larger goal by simultaneously working on different missions.

When James was asked if much changed from the first Crackdown in terms of co-op gameplay, he had this to say:

Yes. We believe quite strongly in co-op gaming and Crackdown was evidence of this - for those people that were having difficulty playing a game, bringing in a mate made it easier.

So with four-player co-op in Crackdown 2 it's about making the game easier - it's four powerful beings in this world. And we don't want to mess around with that.

One of the things we had to change from a competitive point of view is that Crackdown never supported having more than one mission active at once.

We [wanted] four players on four corners of the world on four different missions working towards one goal. That was a big technical transfer but it's something we had to think very carefully about. We wanted that four different people approaching the game from four different angles. We just don't like corridor-ing people.

The interview covers some additional ground, including Ruffian's relationship with Realtime Worlds, his opinion about a version of Crackdown that used the Natal motion control, and how the graphics have evolved to have more of a "comic book" feel.  One particularly interesting quote from James is when he was asked what was his greatest regret from the original Crackdown.  His response is one that echoes some of your own thoughts when playing through the game: the missions.

One of the biggest flaws with Crackdown was the actual mission mechanic was just so repetitive. It was not intentionally [made] that way, it just pulled back to being lowest common denominator sort of thing.

[Taking on] bosses and doing the same thing over and over again was really unrewarding. That always makes me cringe a little bit.

"This is a good chance to say we've addressed a lot of that [in Crackdown 2]. We've thought more about how the interplay works in the game and added more variety. But we had to make that mistake to get to where we are. I'm glad to say we've improved on it.

They had us at the idea of "four powerful beings" running around in this world, but we're glad to hear that that's not all they're doing.

In closing, James had this to say about co-op: "The co-op experience of just having people stand next to each other and be elastic banded together doesn't fit [with what we wanted to do]. Playing the same game for an ultimate purpose, chatting to each other on Live - that's the real co-op experience."  We continue to like what we're hearing from these guys.