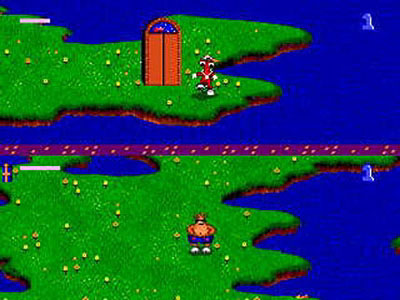 Astute readers will notice that "This Week in Co-Op" is a day early. Well, I'm heading off for a short vacation, but I figured you'd appreciate an early column more than no column at all.

While I am running the risk of covering the territory normally covered by our other (excellent) column, "Co-Op Classics," I couldn't help but write about one of my favorite co-op games, ToeJam and Earl. However, ToeJam and Earl is more than a co-op classic, it is an example of how high-quality co-op is not a new feature. I remember playing the game with my father oh so long ago; it was one of our favorite games. For those who are unfamiliar of the game, you play as two aliens trying to rebuild their ship. Gameplay consists of a sort of open (and randomly generated) world where you collect power-ups on the way to discovering parts to your ship. So, in keeping with my "at least one co-op game a week" mantra, I booted up ToeJam and Earl (from Virtual Console on the Wii) and explored a game that I had loved so much. As it turns out, my love of ToeJam and Earl was not rose-tinted at all; it was as good as I remembered it.

The common theme of this column, a love letter to co-op, is the idea of memorable moments. Nothing makes a good game better than having great "aha" or "wow" moments. It seems to me that Toe Jam and Earl seems to be almost 100% "aha" and "wow," which is a good thing. To preface my remarks, I should say that ToeJam and Earl is a very odd and quirky game. Considering the two main characters are a red, multi-legged rapper and an orange character who seems to be the ancestor to Patrick from Spongebob Squarepants. So, with that in mind, what did I enjoy the most?

The power-up system in the game is integral to gameplay, and always makes the game more fun. One of my favorite power-ups is the root beer, partly because it restores some of your health, but also because of its unfortunate (and hilarious) side effect: massive burping. I also like the rocket shoes, that make you run like a madman, coupled with a "beep beep" sound a la the Roadrunner. So, where is the fun co-op twist? Have you and your buddy drink a root beer and put on the rocket shoes. I've yet to see much of anything more hilarious than two people running around the map, burping and beeping like a pair of odd alien Roadrunners.

One of the core elements of the game is your health/status bar, which not only shows your heath and whatnot, but it also shows your status, sort of like the "what are you doing" feature on Facebook. In a normal game, this would read something like "low on health, "happy," or something useful like that. However, in ToeJam and Earl, the status bar is more of an insult bar, as some of the titles it puts up are things like "ToeJam is a Wiener" and "Earl is a Dufus." So, there really is nothing quite like running on an alien planet (Earth) with you buddy, realizing that you are a wiener and he is a dufus.

Whoever did the character design for ToeJam and Earl deserves a medal...and then a mental evaluation. The character list in the game is probably the most diverse in any game, as it features: giant hamsters in balls, santas with jet packs, hula dancers, odd red devil-looking things, and so forth. The aforementioned hula dancers are especially deadly. Yes, it can be fun to watch you and your teammate (forcibly) doing the hula with a cute, 16-bit girl. But cool turns to terror when you realize that the hula dancers are only a distraction for the bigger baddies, who can hack at you and your friend, as you stand idly by, hoola-ing against your will.

I am sort of surprised that ToeJam and Earl ever got off the ground, since it is as quirky as most any game I've ever encountered. However, maybe the reason why the game was green-lit was its stellar co-op. I've only recounted a few of the more hilarious co-op moments in the game, but to really appreciate the game, you have to play it. The co-op is fun and well-done, the characters act like they are best buds, and a great sense of (good) humor is common in the game. It's a great game to play with a friend, but it is also a great game anyway. There are few games that I could recommend more than ToeJam and Earl. It's also good to see that some games can hold up over time and show. ToeJam and Earl is a seventeen year old video game and can compete with the likes of any new co-op game. Not too bad, old man, not too bad.