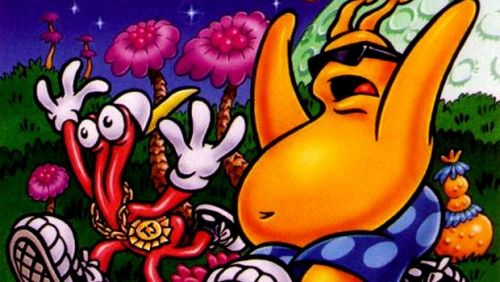 Not all of you might be familiar with the earlier ToeJam and Earl games, since the 90's seem like they were ages ago (for some), but gamers of the era know that they have definitely proven their co-op greatness. The original was a dungeon crawling adventure game revolving around two, funky aliens, ToeJam (the red alien with many legs) and Earl (the fat, orange alien) who’ve crash landed on our plant during the 90’s. To get back home to their planet of Funkotron, they’ll need to collect all the scattered pieces to their busted ship, while surviving the horrors of Earth’s human populace.The second installment was more of a general platformer than the previous game, where the protagonists must find and capture evil Earthlings who became stowaways on ToeJam and Earl’s spaceship trip back to Funkatron from the original. Quickly giving the franchise a cult following with its 90’s, hip-hop culture charm and memorable soundtrack, old-school gamers have longed to see these beloved games released on a more modern platform. Both games feature two player co-op, where players share a screen while their characters are close by, but splits into two screens when they move out of one another’s view. There’s even in-game bonus content, such as ToeJam and Earl able to talk to one another, when playing co-op only. Here, take a  quick look at some gameplay footage from both games to get an idea:

ToeJam and Earl (the original)

ToeJam and Earl in Panic on Funkotron

”I get so many requests from fans,” said Greg Johnson, one of the original creators of ToeJam and Earl series. He has said before that, while he’s currently working on other games besides ToeJam and Earl, he hopes that there will be at least another title in the series (latest title, ToeJam and Earl III: Mission to Earth in 2002) to be made in his career.

I particularly want to create a new cross platform multi-player version of TJ & E and set the characters in some new environments – but with the original rogue-like game-one game play.

No release date has been confirmed by Sega yet, but the creators of the game have stated that Sega is planning to officially release them on both consoles. Whether these games’ versions will release on the same date is also unknown. Regardless, stay tuned for future info and stay extra funky for us, dawgs.