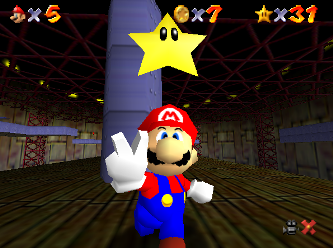 The internet can be an awesome place from time to time. I never cease to be amazed at the sheer ingenuity and dedication of fans who are passionate about their interests, and today we have a great video game example of this phenomena. Super Mario 64 was an instant classic when it was released in 1996, and it was incredibly influential to the 3D platforming genre. Great as it was, though, it was missing one thing... co-op! Even the remake for Nintendo's DS system didn't fix this tragic flaw.

Thanks to the magic of hacking ROMs, the problem has been solved. A person going by the handle 'Skelux' has hacked the ROM for Super Mario 64 to include two player co-op! You can even play online with a friend, if you're willing to use a client like Kaillera. Note that you need a legal copy of the Super Mario 64 ROM first, so don't go breaking the law to get the co-op Mario goodness you crave!