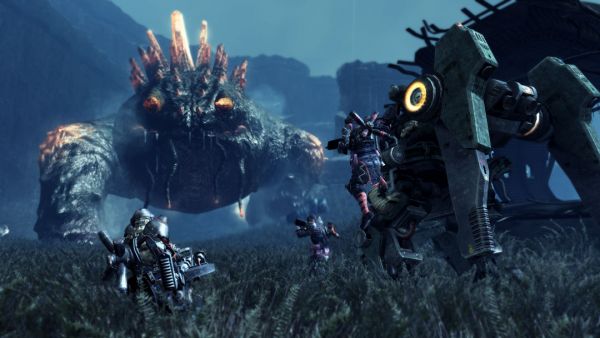 The Akrid from Lost Planet 2 are multiplying, and Capcom wants us to know what we're up against. First, Capcom has given a name to the giant salamander akrid that you faced in the demo. You can now call that giant ugly creature Gordiant. His boss profile suggests that he likes eating survivors, long walks on the beach - but may lose interest if you shoot him in the tonsils. He's one of the few bosses that will actually swallow you and your friends (and have you live to tell about it), but as long as you've got ammo, you can take him out from the inside.

The second boss we get a look at is the gargantuan Red Eye. While you won't run into this beast until the 3rd episode in Lost Planet 2, it may serve you well to remember that his big glowing eyes are actually weak spots. Okay, we know you've seen the video game cliche where all glowing red spots are weak spots, but this boss is huge. As a reference, Red Eye is said to be about 5 times larger than the Green Eye boss from Lost Planet 1, and he's very hungry. Oh, and forget using the tactics on Red Eye that you used on Gordiant - if Red Eye swallows you, that's it, no bullet extraction for you.